RABAT - Hundreds of protesters gathered Thursday to demand change on the anniversary of Morocco's pro-reform movement, born out of Arab Spring unrest three years ago, but weaker than it once was. 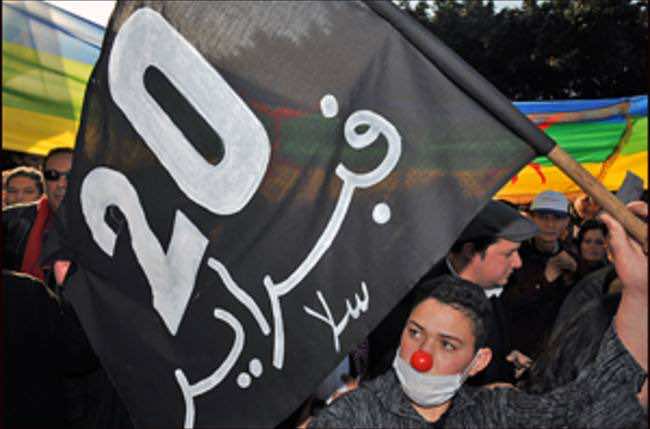 RABAT – Hundreds of protesters gathered Thursday to demand change on the anniversary of Morocco’s pro-reform movement, born out of Arab Spring unrest three years ago, but weaker than it once was.

Members of the February 20 movement were joined in Rabat by unemployed school leavers and Berber activists as they waved banners and chanted slogans denouncing corruption, injustice and despotism outside parliament, an AFP journalist reported.

A separate demonstration was planned in Casablanca.

But the numbers — about 300 hundred protesters in Rabat — were far smaller than in 2011, when tens of thousands took to the streets to call for wholesale democratic reform.

“Nothing has changed. Corruption remains. The government that came to power has not been able to respond to the demands of the people,” veteran human rights activist Khadija Ryadi told AFP.

In response to the protests in 2011, the Moroccan king introduced a new constitution designed to curb his near-absolute powers and held snap polls in November that year that saw the moderate Islamist Party of Justice and Development elected for the first time.

The PJD, which had campaigned in particular to battle corruption, brought real hope of change, and many activists remain disillusioned by the little that the Islamists have achieved since and that few of the constitution’s provisions have been implemented.

“There is disappointment that very little has changed, but change will not happen in a few months,” said Qods, 23, attending Thursday’s protest.

“The movement has been weakened, but no one can deny that it gave us a new constitution and an election that brought a new government to power.”

“Its other great achievement is that there is no more fear to demand change, whether social or economic, even if the regime responds to those demands with repression,” the student added.

Analysts say the turmoil in other North African countries where the 2011 uprisings toppled decades-old dictatorships, notably Libya and Egypt, was a key factor behind the decline in support for the February 20 movement.

The election of the Islamist party and the sometimes harsh repression of protests also played their part.

Scores of protesters have been arrested since the movement began, and activists say more than 30 of its members remain in prison.