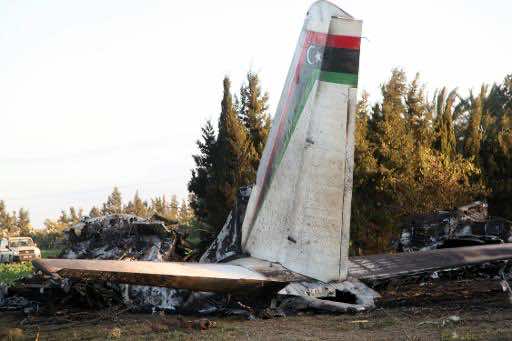 The aircraft came down in a field on the edge of Nianou village, around 40 kilometres (25 miles) from the capital, without hitting any houses, and burst into flames, an AFP journalist reported.

The Libyan flag was still visible on the tailplane amid the charred wreckage, which belonged to the Libyan air force.

“The whole plane was completely burnt out. The emergency services went to the crash site and recovered the charred bodies.”

The plane was transporting Meftah al-Mabrouk Issa al-Dhawadi to Tunis from a military airfield near Tripoli for medical treatment, the Libyan government said in a statement.

Another unidentified patient was on the plane, according to the statement, adding that they were accompanied by four people, including a doctor, and five crew.

Dhawadi was a leader of the Libyan Islamic Fighting Group (LIFG) — a now disbanded movement with alleged links to Al-Qaeda which joined the 2011 NATO-backed uprising that overthrew dictator Moamer Kadhafi.

Several members of the group served in the transitional government of Abdelrahim al-Kib, which held power for a year from November 2011. Dhawadi was undersecretary at the ministry of martyrs and missing persons.

Libya’s deputy defence minister Khaled al-Cherif, himself a former LIFG member, confirmed on Facebook that the group’s former leader had died in the plane crash.

“According to the air traffic controller who spoke to him last, the pilot’s final message was ‘Engine on fire’,” he said.

Mohammed ben Mohammed Elechi told AFP he was still awake when the aircraft hit the ground.

Firemen battled during the night to extinguish the flames that engulfed the wreckage.

Nearly 1,400 of the military transport aircraft were built between 1969 and 1986, 420 of them for export, according to the manufacturer’s website.

At daybreak, teams began searching for the aircraft’s black box flight recorders in a bid to confirm that engine failure was behind the accident and to establish why it malfunctioned.

Sheikh Dhawadi — nom de guerre Abu Abdel-Ghafar — was among the founding members of the Libyan jihadist group that launched an armed campaign against Kadhafi’s regime in 1995, and which Al-Qaeda announced had joined its network in 2007.

The group was formed clandestinely in Afghanistan in the early 1990s, where its members battled Soviet troops alongside other Arab mujahedeen.

In 1992, Dhawadi was captured by the Egyptian authorities and returned to Libya where he spent 18 years in prison.

He was finally freed in February 2011, on the eve of the uprising against the Libyan strongman.

The ex-jihadist was actively involved in the armed rebellion and was eventually named head of the military council of Sabratha, his home town 70 kilometres (40 miles) west of Tripoli.