CAIRO - An Egyptian court acquitted six police on Saturday of killing protesters during the 2011 uprising against Hosni Mubarak, as his now deposed Islamist successor Mohamed Morsi went back on trial. 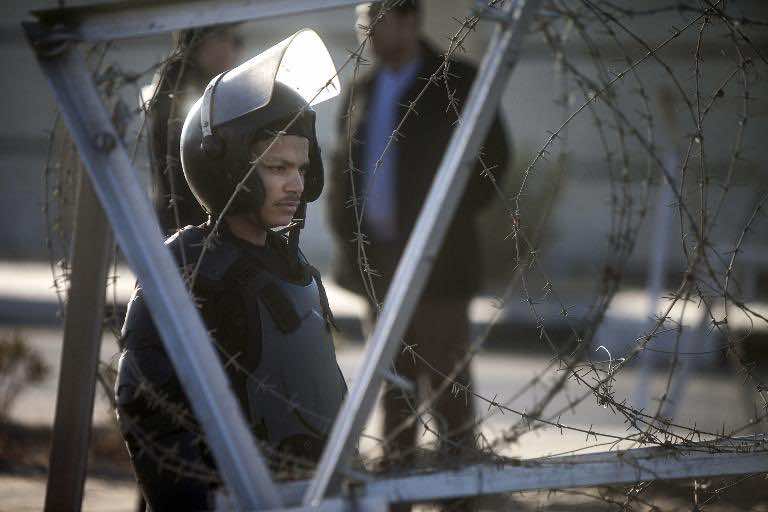 CAIRO – An Egyptian court acquitted six police on Saturday of killing protesters during the 2011 uprising against Hosni Mubarak, as his now deposed Islamist successor Mohamed Morsi went back on trial.

The acquittal of the six officers on charges of killing 83 protesters outside police stations in the Mediterranean city of Alexandria, came as a Cairo court resumed the trial of Morsi on charges of plotting violence during the revolt.

Morsi was toppled by the military in July last year following mass protests demanding his resignation. Since then he and his Muslim Brotherhood have been
retroactively accused of committing much of the violence during the anti-Mubarak uprising.

Morsi, and 130 other defendants including Palestinian and Lebanese militants, are now being tried for organising jailbreaks and attacking police stations during the revolt.

Saturday’s hearing was the second of the trial, after an opening hearing in January. It is one of three faced by Morsi.

Nearly 850 people died during the 18-day uprising that toppled Mubarak, most of them on January 28, 2011, when protesters battled the then-despised police.

Many of those who died were killed outside police stations when protesters attacked what they saw as symbols of Mubarak’s autocratic rule.

More than a dozen policemen were put on trial, including top commanders. Mubarak himself was sentenced to life in prison for his involvement in the killings, but won a retrial on appeal.

Most have been acquitted. Earlier this month, another court overturned the conviction of a policeman sentenced to five years on charges of killing 18 protesters.

The six policemen acquitted on Saturday included the former chief of police in Alexandria. The defendants shouted “long live justice” on hearing the verdict.

In the three years since Mubarak’s overthrow, blame for the killings during the uprising has shifted to Morsi’s Muslim Brotherhood as the police force has rehabilitated itself in public opinion.

Prosecutors allege the attacks on police stations and the jailbreaks, in which Morsi and other political prisoners escaped, were a conspiracy to sow chaos in Egypt.

That narrative of events has gained wider public acceptance amid a backlash against Morsi’s Brotherhood following his single, turbulent year in power.

The Islamist was widely depicted by opponents of his presidency as a burgeoning autocrat with ties to foreign militants.

He faces a separate trial for espionage, in which he is accused of having plotted with foreign militants and governments to conduct attacks in the country.

The retrial of Mubarak, and seven police commanders, on charges of involvement in the killings of protesters is still continuing.