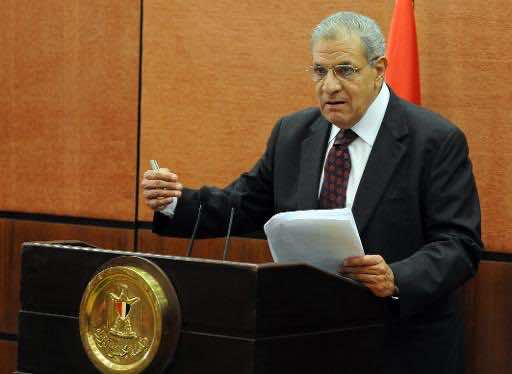 Ibrahim Mahlab, a former state-sector construction boss, vowed to fight “terrorism” and bring back tourists as he began work on forming a new cabinet after the surprise resignation on Monday of prime minister Hazem al-Beblawi.

Beblawi’s government had been installed in July after the military ousted Islamist Mohamed Morsi, Egypt’s first freely elected president and its first civilian one.

But it resigned in the face of mounting criticism of its failure to get to grips with a floundering economy and worsening industrial unrest.

Mahlab said that interim president Adly Mansour had tasked him with forming a new government “in three to four days” and promised to work hard to improve services for Egyptians and fight “terrorism.”

“This will create the conditions for investment and the return of tourism,” he said.

Since Morsi’s overthrow, Islamist militants have killed several foreign tourists as well as scores of security personnel in attacks that have severely dented the economically vital tourism sector.

A limited reshuffle had been expected to allow army chief Field Marshal Abdel Fattah al-Sisi to step down as defence minister and run for president.

But Sisi, who is expected to win the election this spring, will retain his post in Mahlab’s cabinet for around two weeks until an electoral law has been passed, a senior official told AFP.

Mahlab, a former chairman of Egypt’s state-owned Arab Contractors Company, one of the Middle East’s leading construction conglomerates, was named to the upper house of parliament in 2010, the year before Mubarak’s overthrow in the Arab Spring uprising.

Mahlab, who is now in his 60s, resigned from the company in September 2012 after heading it for 11 years, the state-owned daily Al-Ahram said.

But his government’s resignation took even Washington by surprise.

Sisi, who emerged as the country’s most popular political figure after ending Morsi’s divisive one-year rule, has not yet announced his candidacy for the president, but aides say he has already decided to stand.

The field marshal, who was also first deputy prime minister in Beblawi’s cabinet, has to resign from the government and the army before he can officially announce his candidacy.

Analysts say the formation of a new government is likely to work in Sisi’s favour.

“If Field Marshal Sisi decides to run, he would like to run with a government that has a good reputation and can help him by resolving some of the urgent problems faced by the people,” said Mustapha Kamel al-Sayyid, a political science professor at Cairo University.

Since July, Egypt has been battling deadly street violence and militant attacks that have scared off foreign investors and tourists alike.

A bloody crackdown on Morsi’s Muslim Brotherhood and other Islamists supporters has left more than 1,400 people dead.

Many Egyptians, weary of the three years of turmoil since Mubarak’s ouster, view Sisi as a strong hand who can restore stability.