RABAT - Thousands of Moroccans protested outside the French embassy on Tuesday against comments about the kingdom attributed to a senior French official, as relations between the normally close allies cooled. 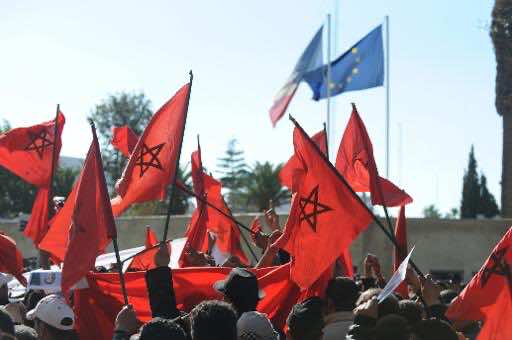 RABAT – Thousands of Moroccans protested outside the French embassy on Tuesday against comments about the kingdom attributed to a senior French official, as relations between the normally close allies cooled.

Morocco, which has strong commercial and cultural ties to its former colonial ruler, has already reacted furiously to the announcement last Thursday of two lawsuits filed by an NGO in Paris accusing Moroccan intelligence chief Abdellatif Hammouchi of “complicity in torture.”

Adding insult to injury, the Spanish actor and bete noir of Rabat, Javier Bardem, was quoted by mainstream French media on the same day citing diplomatically embarrassing comments about Morocco allegedly made by the French ambassador to the United Nations three years ago.

“Morocco is a mistress who you sleep with every night, who you don’t particularly love but you have to defend,” Bardem quoted him as saying, at the launch in Paris of his new documentary on the disputed Western Sahara, called “Sons Of The Clouds, The Last Colony.”

“We are here to protest against the comments of the French ambassador who insulted Morocco, to denounce this declaration,” said Driss El Brahmi, 50, from Casablanca.

“We want to show that we are a sovereign independent people, and that we are ready to sacrifice ourselves for our king.”

Reflecting the seriousness of the diplomatic row, President Francois Hollande had on Monday evening telephoned the king, who is currently touring West Africa, to reassure him of France’s “constant friendship.”

The president sought to “dispel the misunderstandings,” and underlined his desire to strengthen ties, his office said. 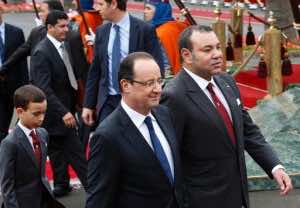 Hollande’s intervention came after Morocco unilaterally “postponed” a visit by environmentalist Nicolas Hulot, the president’s special envoy for the protection of the planet, who had been due to arrive on Monday.

Rabat summoned the French ambassador on Friday to reject the torture allegations and vigorously protest the lawsuits against Hammouchi, who was accompanying the interior minister on a visit to Paris on the day they were announced.

Morocco reproached the French authorities for sending seven police to the Moroccan ambassador’s residence in Paris to inform Hammouchi of a summons issued by the investigating judge, rather than going through the usual diplomatic channels.

France’s foreign ministry moved swiftly to contain the fallout, saying on Saturday that it was a “regrettable incident” and promising to “shed light” on the matter. It also categorically rejected Bardem’s comments.

The two cases against the Moroccan intelligance chief that sparked uproar on Thursday were filed by Action by Christians for the Abolition of Torture (ACAT), an NGO based in Paris.

They relate to a Sahrawi independence activist, Ennaama Asfari, who was handed a 30-year jail term in 2013 by a Moroccan military tribunal on the basis of confessions allegedly extracted under torture.

A separate lawsuit accusing Hammouchi of torture was filed on Sunday in France by the lawyer of Moroccan former kickboxing champion Zakaria Moumni, jailed for 17 months on charges of racketeering before being pardoned by the king in 2012.

Moumni said he confessed to the charges against him only because he was tortured.

On Monday ACAT sharply criticised the French foreign ministry, insisting that “in a democracy” diplomacy has “absolutely no right to interfere in the work of the judiciary.”

A UN special investigator said in 2012 that the torture or cruel and inhumane treatment of prisoners was “very frequent” in Morocco, particularly for political prisoners.