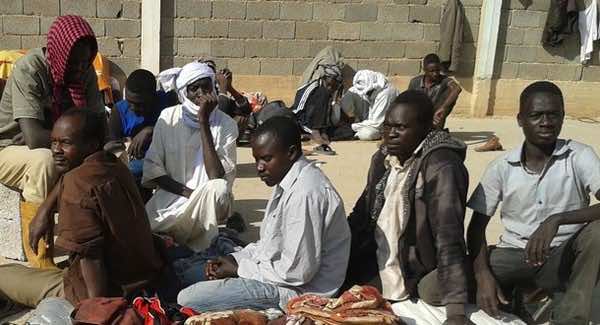 Rabat- Another group of sub-Saharan African migrants has been found dead off the coast of Sebta (Ceuta), a Spanish possession on the Mediterranean coastline of Morocco. The group of 15 migrants is suspected to have  drowned while trying to reach Sebta by sea.

The story began when 300 people who live in the adjoining forests of Sebta decided to enter the city by night. They divided into two groups, one that traveled to Sebta on foot, and another by sea in order to scatter the surveillance efforts of the Spanish Civil Guard.  Before morning, the migrants had been scattered and were dead. The survivors said that Spanish troops shot them with rubber bullets while they were still in the water. Others said they had been sprayed with tear gas while swimming.

If Sebta and Melilla are occupied cities, and if the Spaniards would like to keep those cities, regardless of the cost, why does Morocco share the costs with them? Why does Morocco foot the bill for the costs alone so often?

Spanish authorities say time and again that they were in those cities even before the appearance of a central State in Morocco.  In other words, they suggest that when they arrived on our territory, Morocco was a kind of terra nullius, or “land belonging to no one,”which is an obvious historical untruth.

But assuming that one can give credit to their claims, why should Morocco help them as it does when they were supposed to have come here before Morocco’s existence? And why don’t our northern neighbors take over everything on these African Moroccan territories? These people want Sebta to remain a Spanish city, but refuse to pay the price or assume all the problems to make it so.

Actually, the problem is not only a Spanish responsibility but also a Moroccan one. Morocco grants all favors and facilities to Sebta that enables the city to be and to exist. To confirm this, we just need to know that Sebta cannot live without the 30,000 people who go there every day from Morocco, who buy and sell their products there. Sebta couldn’t last under Spanish occupation if Morocco did not provide its water, bread, and meat.

Moroccans have not forgotten the humiliation they suffered twelve years ago when an armed conflict almost erupted between Rabat and Madrid regarding the small Mediterranean island of Leila, claimed by both Spain and Morocco. The Spaniards attacked Morocco occupying the rock and jailed the few Moroccan soldiers who were there and agreed to give it back to Moroccans after an American mediation.

And in Melilla, it’s a similar situation. The Spaniards stop dozens of Africans who are organizing actual suicide operations from entering the city that they consider European and then deliver them to Morocco which accepts them and hosts them at border crossing points that are kept secret.

If cities such as Sebta and Melilla, in addition to many islands, are occupied, the first thing to do is to act consequently and not cooperate with the occupant. The most curious phenomenon is that we Moroccans have to assume the financial costs of the occupation of our land.

African migrants, who have unquestionably suffered due to their status, are faced with three possibilities: either they die in their attempts to reach Spain, or they succeed in arching Spain, or they are repatriated to their country of origin.  And in all three cases, Morocco remains etched in their memory as a bad memory, like an impassable wall that stands between them and their dreams. Morocco doesn’t just substitute for Spain for work, but it also lends its body so that Spain can wipe its feet from all the dirty things it commits.

If our Moroccan cities are occupied, really occupied, then release them or leave them alone, but don’t force us Moroccans to pay with our money for the occupation.