Morocco World News
Home Highlights on Morocco Jacob Cohen: A Law Against Israel is Impossible to Enact in Morocco

Rabat - Well known Jewish Moroccan author, Jacob Cohen addressed the proposed law outlawing “normalization” with Israel and opined that it would not be enacted in Morocco. 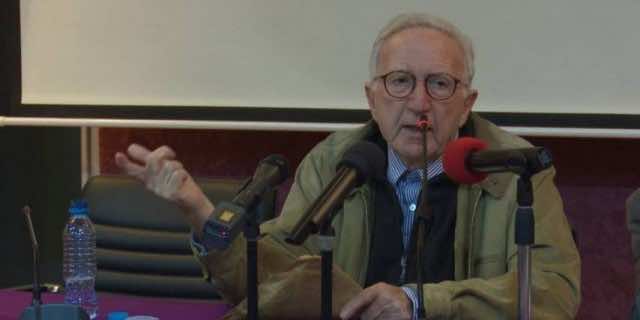 By
Aziz Allilou
-
Aziz Allilou is a student at the Higher Institute of Media and Communications (ISIC) and Morocco World News correspondent in Rabat.
Feb 26, 2014
Spread the love

Rabat – Well known Jewish Moroccan author, Jacob Cohen addressed the proposed law outlawing “normalization” with Israel and opined that it would not be enacted in Morocco.

At a conference entitled “Israeli Apartheid Week” organized by the Justice for Palestine Club on Tuesday at the École de Gouvernance et d’Économie in Rabat, Jacob expressed doubt that the proposed law which would criminalize direct or indirect dealings with the “Israeli entity” would ever be enacted.

At the same time he recognized the notable increase in activities of associations and organizations in Morocco said to be aimed at reaching a dialogue between Arabs and Israelis, and pondered the real goal behind these efforts.

Cohen questioned the background of the people behind these associations and organizations. “Who are they working for?,” he asked.“Morocco or Israel?”

Cohen warned Moroccans against being misled by “non-innocent dialogue” which seeks to legitimize the Israeli occupation of Palestine.

Doubting the Israeli “mythology of democracy,” Cohen highlighted aspects of racism in the Zionist regime and the inhuman practices perpetrated against Palestinians.

Jacob suggested that boycotting Israel is the most painful weapon that can be used against Israel in order to counter Israel’s attempts to penetrate the Arab world.

He concluded the conference by criticizing the series of “illogical negotiations” which have gone on for more than two decades without resolving the dispute.