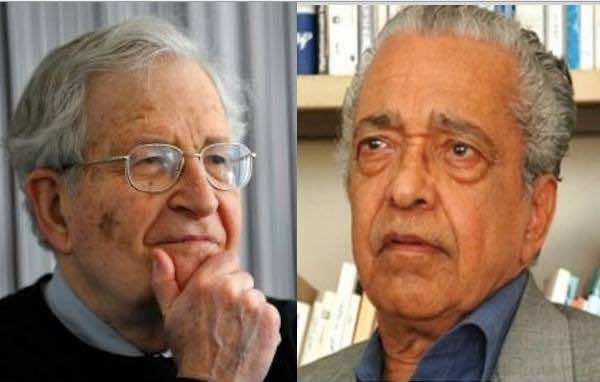 Some university students, unfortunately, are no longer seeking to know the truth. They are lazy when it comes to the process of reading about the greatest scholars in history. These neglected scholars include the American Noam Chomsky, and Moroccans El Mahdi El Mandjra, Mohamed Choukri, and Abed Al-Jabri.

Noam Chomsky is an American linguist, philosopher, cognitive scientist, logician, political commenter, and activist. Chomsky is certainly discussed in all Moroccan university courses in many different fields of linguistics. FSE (the Faculty of Education of Science) program is amongst those universities that focus on teaching and other fields in which Chomsky is included as a major pioneer of many theories.

During a ‘Methods and Approaches’ course, my professor and classmates were tackling the ‘Audiolingualism Method’ as well as Chomsky’s view on this method. It is commonly believed that this linguist rejected the structuralist approach to language description and the behaviorist theory of language learning. Yet, my classmates laughed when I told my professor that Noam Chomsky had just turned 85. Moreover, some others gave me a look of disapproval and mockery.

What made them laugh? Simply, because I mentioned a great intellectual. Why didn’t they participate in this discussion? Was it because they don’t know who Noam Chomsky is? Why don’t they know who Chomsky is? Is it because they are busy and interested in watching Mexican soap operas and Real Madrid- FC Barcelona soccer games?

Chomsky has produced more than one hundred books and countless articles. He is the pioneer of generative grammar. Most importantly, he revolutionized the field of linguistics and grammar before recently turning to politics and media.

El Mahdi El Mandjra, well-respected worldwide but marginalized in his own country, is a Moroccan of great intellect and a futurist that many Moroccan students are not aware of. Professor El Mahdi Al Mandjra is internationally known as futurologist and one of the co-founders of the International Federation of Futurologist Studies. He has many theories about culture, identity, civilization, international relations, education, and the economy.

Another great Moroccan thinker is Mohamed Choukri who spent several years behind bars. He is famous for his novel For Bread Alone in which he was described by the American playwright Tennessee Williams as “a true document of human desperation, shattering in its impact.” Although he didn’t go to school until the age of 21, he became a successful novelist. Yet, it is all too common that we become consumed by information about singers, soccer players, and actors. How many soccer players have we followed, how many songs have we memorized and how many trivial series have we watched?

I argue that these great thinkers do not need students to admit whether they are of great intellect or not.

“Some Moroccans watch games, smoke hashish, and care only about sex. Those in charge of government have shaped individuals in this way, in order to urge people to remain silent and ignorant, because watching a soccer game and talking about a player like Messi will enable them to forget something called politics and basic rights. They are only concerned with this kind of addiction. Hence, they don’t read and get knowledge, but, rather, they focus on these icons,” said Yassine Edder, a master’s student.

Addiction to watching football matches has become a very popular phenomenon. People pretend that they enjoy supporting players, but, in fact, they do not. They find a great delight in watching soccer matches. How can we expect from our citizens to take a close look to the intellectuals? Where is the role of today’s schools?” said Mohammed El-Younssi, a bachelor’s student.

Frankly, students have to focus more on what matters. They should not only consume what is sold to them on TV. They have to think critically and learn from world-renowned scholars. They also have to read intelligent materials instead of following fake singers and trivial series.