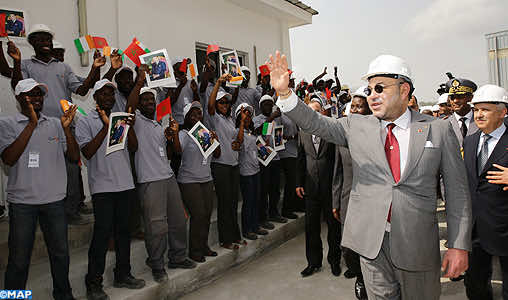 Casablanca- The late King Hassan II compared his kingdom with a tree with African roots and its branches in Europe, but this never happened. Hassan II ruled Morocco for 28 years and his death left the country in limbo. The roots are not really African and the branches are not particularly European.

Hassan II died with limited relations between Morocco and the rest of Africa, as official economic figures testify. The only exception is the personal relationships that the King had built up with many leaders on the African continent, including Omar Bongo, Mobutu Sese Seko and Abdou Diouf. Besides these friendships, Morocco had no African foreign policy, apart from the policy of defense against Algerian attacks in the Sahara dispute.

But today things have changed, and King Mohammed VI began his second trip in Africa in less than six months. In Mali, Gabon, Guinea and Ivory Coast. No one would have ever thought that Hassan II would travel within Africa twice in one year. The eyes of our mainly French-speaking diplomatic relations, were turned to Paris and Brussels, as if they were the only capitals in the world.

No one in Hassan II’s time had thought of Morocco as African first, and able to do its best and prosper the most within its own region. No one had believed that working within the region, would give Morocco the means to talk to the great world powers. Morocco would have power nor influence on the world stage without this regional involvement in this tumultuous world where only the powerful countries are heard.

Let’s look at the Moroccan trade scale with the few African countries that have economic relations with Rabat: the surplus always favors Morocco, exporting more to them than it imports. In 2013 Maroc Telecom recorded a 27% leap in its revenue in Mali, Burkina Faso and Mauritania, even though it decreased by 17% internally. The same can be said for Attijariwafa Bank, which operates in 11 African countries and saw its performance soar in these countries, its profits increasing faster in sub-Saharan Africa than in Casablanca. Meanwhile, BMCE Bank, is becoming ever more established in sub-Saharan Africa.

Morocco has an important role to play in Africa, which needs friends during difficult times. Despite the crises, the problems and the instability, Africa remains a very promising continent, especially for Morocco, which is a medium-caliber power because it is neither industrial nor agricultural nor oil-producing, but a service-based economy and, most importantly, the point of passage to Europe. Also, and in parallel to royal diplomacy, we are in need of institutional diplomacy that works year-round. However, this diplomacy doesn’t exist today, and this is why the King works to fill the gap left by the official diplomatic machine, which is panting and staggering without significant strategic vision.

Last year, France set up a committee experts composed of five prominent figures led by former Foreign Minister Hubert Vedrine. The committee’s mission was to review and revise French policy in Africa after Paris noticed a decrease in influence on the continent. The committee advised the French government to “lean on Morocco, which has its footholds in several African countries and companies with large and important holdings on the continent, in order to not leave the field open to the Chinese and Americans who are currently investing in it.”

So, do you understand now why the King visited Sub-Saharan Africa twice in less than six months?