Mexico City— As a boy, Mexico's Alfonso Cuaron dreamed of becoming an astronaut. Instead, he has soared into Hollywood's stratosphere, winning the best director Oscar on Sunday for his space thriller "Gravity." 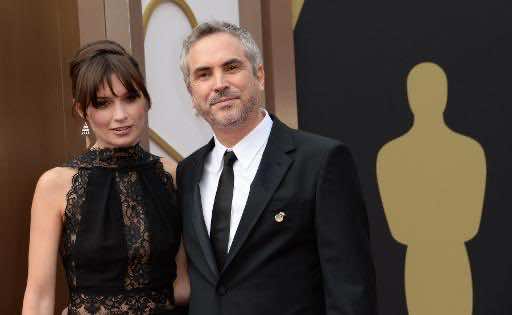 Mexico City— As a boy, Mexico’s Alfonso Cuaron dreamed of becoming an astronaut. Instead, he has soared into Hollywood’s stratosphere, winning the best director Oscar on Sunday for his space thriller “Gravity.”

Cuaron became the first Latin American to win the film world’s top directing prize, with a 3D movie starring George Clooney and Sandra Bullock as astronauts lost in space after an accident.

“Sandy, you’re ‘Gravity.’ You are the soul, heart of the film — the most amazing collaborator and one of the best people I’ve ever met,” Cuaron said as he accepted his award, one of the many Oscars won by the film.

The last American to have won the best director Oscar was Kathryn Bigelow in 2009 for “The Hurt Locker.”

The Mexico City native was a heavy favorite after dominating the awards season, winning at the Golden Globes, the Directors Guild of America and Britain’s Baftas.

The Oscar also caps an impressive series of successes for Mexican cinema in general, with prizes won in prestigious festivals and box office records broken domestically and in the neighboring United States last year.

Cuaron was previously nominated for an Oscar for best original screenplay for the Mexican road trip drama “Y Tu Mama Tambien” in 2002. He earned nominations for best adapted screenplay and film editing for the dystopian thriller “Children of Men” in 2006.

He also took part in a massively successful film franchise, directing “Harry Potter and the Prisoner of Azkaban,” the third installment in the series about the boy wizard.

“Gravity” has earned comparisons to the late Stanley Kubrick’s epic “2001: A Space Odyssey.”

The film tells the story of veteran astronaut Matt Kowalski (Clooney), who tests a jet-pack suit on his last space flight, while Ryan Stone (Bullock) is on her first trip into orbit.

They survive a collision between satellite debris and their spacecraft, leaving them adrift in the void.

Making the film involved its own technological challenges.

The filmmakers created a “cube of light,” a box filled with thousands of tiny LED lights allowing Cuaron to move the universe around the actors.

For some scenes, the actors were placed in rigs that rotated or tilted while they were being filmed with a camera fitted on a robotic arm.

Cuaron, who has lived in London for more than a decade, is part of a golden generation of Mexican filmmakers that includes “Babel” director Alejandro Gonzalez Inarritu and “Hellboy” director Guillermo del Toro.

The trio, known as “The Three Amigos,” founded a production company called “Cha Cha Cha Films.” They have all earned Oscar nominations, but Cuaron became the first to win one.

A new generation has emerged, with Amat Escalante winning the best director award at Cannes for his drug drama “Heli” and Eugenio Debrez breaking box-office records for a Hispanic film in the United States with the comedy “Instructions Not Included.”

Mexican veteran filmmaker Felipe Cazals, who has known Cuaron since 1975, said his friend is more interested in making good films than winning prizes.

As a kid in Mexico’s sprawling mega-capital, Cuaron was a fan of the US television series “Lost in Space,” dreaming of becoming an astronaut.

But he inherited his mother’s love for films and received his first camera when he was 10 years old before attending the CUEC film school at the National Autonomous University of Mexico.

Filmmaking is a family thing.

Cuaron had Jonas with his first wife, actress Mariana Elizondo. He is separated from his second wife, Italian film critic Annalisa Bugliani, with whom he had two children.