Alexandria — The family of a blogger whose death became a rallying cry in Egypt's 2011 uprising called for the maximum jail term as a court readied to give its verdict Monday in the retrial of two policemen. 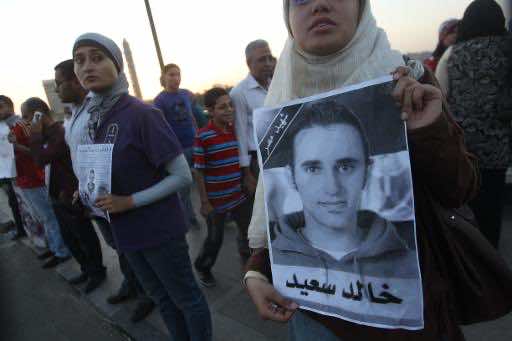 Alexandria — The family of a blogger whose death became a rallying cry in Egypt’s 2011 uprising called for the maximum jail term as a court readied to give its verdict Monday in the retrial of two policemen.

Policemen Mahmoud Salah Mahmoud and Awad Ismail Suleiman are accused of torturing and killing Khaled Said in June 2010 after unlawfully arresting him at an Internet cafe in the Mediterranean city of Alexandria.

An initial trial sentenced the defendants to seven years in jail in October 2011 after finding them guilty of unlawful arrest and excessive brutality.

Egypt’s Court of Cassation ordered the retrial after the defendants appealed, while angry supporters of Said felt the sentence was too lenient.

“We have asked for the maximum sentence, which is 15 years in prison,” Mahmud el-Bakri Atifi, lawyer for Said’s family, told AFP, adding that the earlier verdict was an “injustice”.

“Egyptians must be reassured that the police offer them security and are not a threat to them.”

Police initially said that Said choked to death after swallowing a packet of drugs.

Medics, however, said he died of asphyxiation after being beaten, and that the packet of drugs was thrust in his mouth when he was unconscious.

Pictures of Said’s badly marred face after his death spread on the Internet and his case became synonymous with police brutality under then president Hosni Mubarak.

His death became a flashpoint between Mubarak’s government and opposition activists, who vented their anger on a Facebook page called “We are all Khaled Said”.

It was on this page that one of the first calls was issued for the revolt which toppled Mubarak.

Said’s supporters and opposition activists have often clashed with security forces, in particular during the trial hearings.