ALGIERS - Algerian President Abdelaziz Bouteflika made a rare appearance Monday to drop off papers for his reelection, as concerns grow over the ailing 77-year-old's bid for a fourth term. 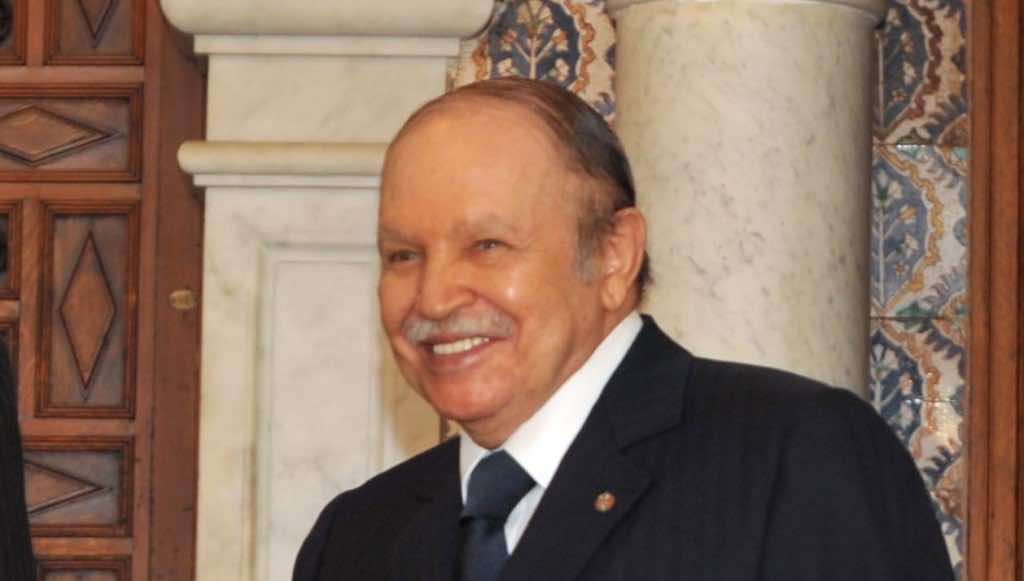 ALGIERS – Algerian President Abdelaziz Bouteflika made a rare appearance Monday to drop off papers for his reelection, as concerns grow over the ailing 77-year-old’s bid for a fourth term.

The head of state handed over the dossier for his candidacy in the April 17 election to the constitutional council, the national news agency APS reported.

It came as two candidates for the presidency withdrew from the race, saying the vote had been fixed.

Bouteflika was hospitalised in Paris for three months last year after suffering a mini stroke. He has chaired just two cabinet meetings since returning home in July and has not spoken in public since 2012.

A call on Sunday from the veteran leader for Algerians to turn out in force at the election made through his justice minister did little to allay concerns over his fitness to stand.

His reelection bid sparked protests in several towns, with police forcefully dispersing a demonstration in Algiers on Saturday, and has even launched the “Barakat” movement, whose sole aim is to oppose his candidacy.

And key figures from Algeria’s political classes, the military and civil society groups have added their voices to a growing chorus of dissent over a new mandate for the veteran head of state, who has been in power since 1999.

On Monday, former prime minister Ahmed Benbitour withdrew his candidacy, saying the vote would be “piracy with legal backing”.

And former general Mohand Tahar Yala also said he had pulled out because the polls had been “rigged ahead of time to impose a fourth mandate” for Bouteflika.

Another retired general, Hocine Benhadid, recently told Arabic daily Al-Watan that a fourth term for Bouteflika seemed “impossible” to him, saying he could “neither talk nor stand up”.

Rights activist Ali Yahia Abdenour went a step further, calling on the president to submit a certificate to the constitutional council proving “that his physical state allows him to fulfil his role,” French-language daily Liberte said.

Before he handed over his candidacy papers on Monday, it had been unclear whether Bouteflika would appear in person ahead of the midnight Tuesday deadline, as is customary.

Former prime minister Ali Benflis, who is seen as Bouteflika’s main rival in the April 17 vote, is set to submit his dossier to the council on Tuesday morning.

Although Bouteflika has not spoken in public since May 2012, he has received several foreign dignitaries, and he chaired two cabinet meetings in September last year.

His prolonged silence, even during the announcement of his candidacy, which he made on February 22 through Prime Minister Abdelmalek Sellal, has worried even those close to the president.

Another ex-premier, Mourad Hamrouche, called for a “peaceful” change of the regime, which he said was no longer capable of running the country, and saying the army should play a role in the change in government.

Louisa Hanoune, secretary general of the Workers Party, who is also running and seen as close to Bouteflika, criticised Sellal for announcing the president’s candidacy.

She called the move “abnormal” on Sunday, adding “Sellal did not have the right to do that, it is a deviation,” and pointing out that Sellal was also president of the commission for preparing the elections.

Said Sadi, former head of the secular opposition Rally for Culture and Democracy Party, has also spoken out against Bouteflika.

As prominent figures have voiced their worries about Bouteflika’s candidacy increasingly vocally, those close to him have been bullish about his run.

Sellal himself has said the president “is very well” on several occasions, as have other ministers close to Bouteflika.

On Monday, Sellal said the reelection campaign “will begin within the limits set by the law” on March 23, with “surprises”, APS news agency reported.

Amara Benyounes, head of the Algerian Popular Movement, and minister for investment and the promotion of industry, was confident Bouteflika’s was fit for a fourth term.

“He will manage the country with his head, not his feet,” Benyounes said.