Tripoli — Libyan authorities vowed Monday to pursue a democratic transition in the face of mounting lawlessness after two MPs were shot when protesters stormed the country's transitional parliament. 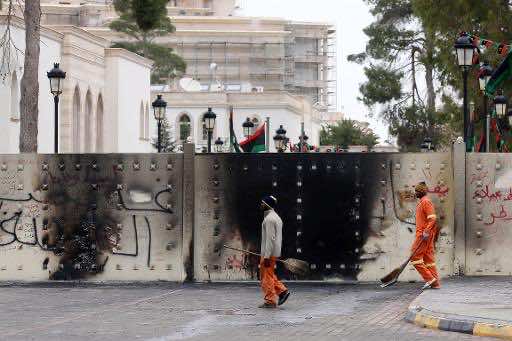 Tripoli — Libyan authorities vowed Monday to pursue a democratic transition in the face of mounting lawlessness after two MPs were shot when protesters stormed the country’s transitional parliament.

The two General National Congress members were shot and wounded Sunday as armed protesters stormed their building in Tripoli. In separate violence, a French engineer was killed in the restive eastern city of Benghazi.

“I assure you we are committed to the path of the February 17 revolution and to pursue the democratic process,” GNC president Nuri Abu Sahmein said, referring to the uprising that ended Moamer Kadhafi’s four-decade rule.

Speaking on television, Abu Sahmein said the attack was a “flagrant aggression on the seat of legitimate sovereignty,” and urged former rebels who ousted Kadhafi to protect state institutions.

On Monday, ex-rebels equipped with pick-up trucks mounted with anti-aircraft guns were posted around the GNC building, where at least five burnt-out cars testified to the previous day’s violence.

Abu Sahmein said the GNC — Libya’s highest political authority — was examining a roadmap for the handover of power “as quickly as possible” to an elected body.

The GNC was elected in July 2012 to an 18-month mandate but it stirred popular anger by extending from early February until end of December.

Under pressure from demonstrators, it later announced early elections but gave no date for the vote.

The head of an elected panel tasked with preparing elections, Nuri al-Abbar, resigned his post Sunday saying Libya had to “end political tensions and restore order” before holding polls.

Libya’s political class is deeply divided, and GNC members are still demanding the resignation of Prime Minister Ali Zeidan, although they have failed to oust him in a vote of confidence.

Dozens of armed demonstrators on Sunday demanded the GNC be dissolved and railed against the “kidnapping” the previous night of participants in a sit-in protest outside the parliament building.

Two members were “hit by bullets when they tried to leave the venue in their cars,” said Abu Sahmein.

For security reasons, the GNC met Monday in a Tripoli luxury hotel to discuss the previous day’s incidents, a deputy said.

The United Nations Support Mission in Libya strongly condemned “the assault against its (GNC) members as well as the vandalising of the premises”.

The attack comes in the run-up to an international conference on Libya to be held Thursday in Rome to weigh assistance for the transitional authorities.

In Benghazi, meanwhile, gunmen on Sunday shot dead a French engineer who worked for a company doing extensive work at a medical centre in the eastern city.

The French company he worked for announced Monday it had evacuated all of its expats, and a diplomatic source confirmed the departure from Benghazi of a dozen foreigners.

The government announced a six-member ministerial team was sent to Benghazi to examine ways to restore order in the city, the scene of almost daily attacks on security forces.

As the team headed to Benghazi, gunmen shot and killed two members of the security forces in the city centre, security sources and medics said.

Benghazi, cradle of the 2011 uprising, has been a hit by waves of unrest, including an assault on the US mission in 2012 that killed the ambassador and three other Americans.

Three years after the uprising, the government and GNC have come under increasing criticism from Libyans who accuse them of corruption and failing to provide security.

Criminals roam the streets, and rival tribes shoot it out to settle long-standing disputes, while many ex-rebels have formed powerful militias rather than integrate into the regular armed forces and police.

Adding economic misery to Libya’s woes, protesters have blockaded and shut down oil terminals, threatening to bankrupt a government that relies almost exclusively on petroleum revenues to operate.