Cairo — The murder trial of deposed Egyptian president Mohamed Morsi was adjourned to Thursday for the court to consider a defence request for new judges. 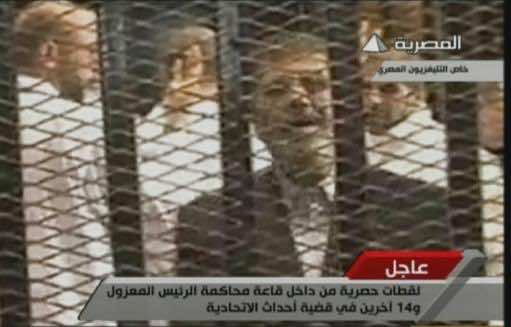 Cairo — The murder trial of deposed Egyptian president Mohamed Morsi was adjourned to Thursday for the court to consider a defence request for new judges.

The trial is part of a relentless government crackdown against Morsi and his Muslim Brotherhood movement since the military ended his turbulent year-long rule on July 3.

Morsi is accused of inciting the killing of opposition protesters outside the presidential palace in December 2012.

At Tuesday’s hearing, a lawyer representing one of Morsi’s co-defendants requested that two of the three judges be replaced, alleging that one of them spoke about the case in a media interview.

Lawyer Mohamed al-Masri had initially asked that the court include the judge’s interview in the trial records.

“But since this request was ignored, we are presenting a recusal request,” head defence lawyer Mohamed al-Damati told AFP.

A similar request for appointing new judges has been made in two other trials involving Morsi, and an Egyptian appeals court is expected to decide on it on April 9.

In one of the trials, Morsi and others are accused of breaking out of jail during the 2011 uprising that toppled veteran president Hosni Mubarak.

The second trial concerns accusations of espionage against the Islamist president.

A date for a fourth trial, on charges of insulting the judiciary, has yet to be set.