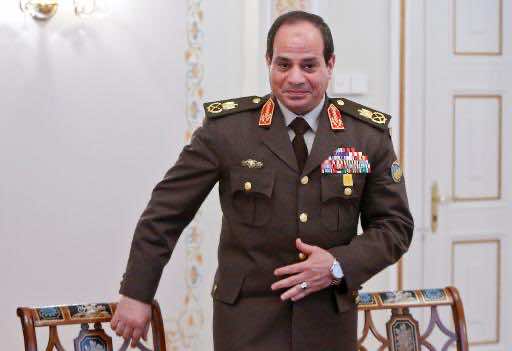 Officials close to Sisi told AFP the recently promoted field marshal would step down as defence minister after a law is passed to regulate the election expected this spring.

Sisi emerged as the most popular political figure in Egypt after he overthrew Islamist president Mohamed Morsi in July following massive protests against the year-long rule of Egypt’s first freely elected leader.

Sisi said “he cannot turn his back when the majority wants his nomination in presidential elections,” the official MENA news agency reported.

“The next days will witness official measures,” it quoted him as saying.

Sisi is seen by his supporters as a strong hand who can stabilise Egypt following three years of unrest ignited by the 2011 uprising that toppled longtime ruler Hosni Mubarak.

Supporters rallied in the thousands in January calling on Sisi to run, and the military itself has said it would back his decision to enter the election, which he is certain to win.

Interim president Adly Mansour is expected to approve the election law this week or next week by the latest.

Sisi is reviled by the Muslim Brotherhood and other Morsi supporters, who say he masterminded a coup against the country’s first democratically elected and civilian president.

Morsi himself is on trial on various charges after the military detained him on the night of his ouster.

His supporters have repeatedly taken to the streets in protest, often setting off clashes with police and civilian opponents. The violence has claimed at least 1,400 lives since Morsi’s ouster, according to Amnesty International.

Militant groups have meanwhile escalated a campaign of bombings and other attacks on security forces, killing scores of policemen and soldiers.

Sisi, if elected, may have to take unpopular measures such as streamlining Egypt’s bloated subsidies for food and fuel.

His supporters believe only Sisi, with his relatively broad support base, could pull off such measures.