CAIRO - The first woman to head an Egyptian political party has expressed concern that a return to military rule could threaten democracy in a country roiled by three years of turbulence. 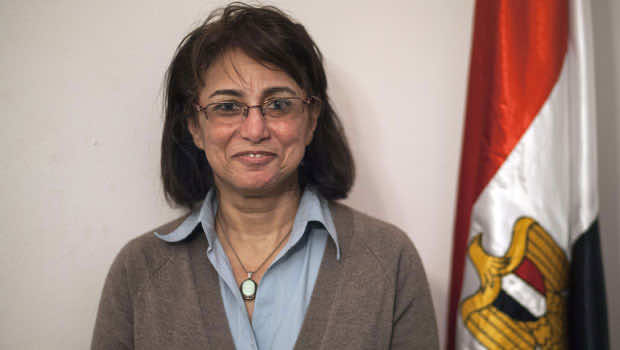 CAIRO – The first woman to head an Egyptian political party has expressed concern that a return to military rule could threaten democracy in a country roiled by three years of turbulence.

Hala Shukrallah, a Copt who now leads the liberal Al-Dostour Party, told AFP the failure of democratic groups to throw up a civilian leadership was benefitting the military, and could also help the outlawed Muslim Brotherhood make a comeback.

“We are asking questions regarding the entrance of the military in a democratic election,” said Shukrallah, 59, when questioned about the possible election of army chief Field Marshal Abdel Fattah al-Sisi as Egypt’s next president.

“We have the very specific opinion that there is a danger, that this might infringe on the democratic process,” she said in an interview at her party headquarters in central Cairo.

Sisi, the most popular political figure in Egypt after he ousted Mohamed Morsi, the country’s first freely elected and civilian head of state, said Tuesday he “cannot turn his back” on demands that he run for president.

He has yet to formally announce his candidacy, but his supporters say he is certain to win the vote.

Shukrallah, who was educated in Britain, was elected in February to head Al-Dostour, which was formed in 2012 by former vice president and opposition leader Mohamed ElBaradei.

Shukrallah, a sociologist who was arrested several times in the 1970s and 1980s for her fiery student activism, has helped founding civil society groups fighting for women’s rights.

Her election has been hailed as a positive “change” in Egypt, where Copts — the largest Christian community in the Middle East — and women in general have traditionally faced discrimination.

“Women have been very much in the forefront of (the) revolution and I think that has been clear not only to the people who were part of the revolution… but it has been very clear to the rest of society,” she said, suggesting her election reflected the “shifts” in the society.

After three years of tumult, “we are still wondering where is social justice, we are still speaking about what is happening to democratic freedoms and human rights,” said Shukrallah.

“So I think we are facing a challenge. This is a tug-of-war and there are very deep interests rooted within society that are fighting back and that want to maintain the old regime.”

On Saturday, Egypt unveiled a new cabinet led by Ibrahim Mahlab, a former member of the National Democratic Party, the ruling party of Mubarak who was ousted in 2011.

The previous government quit amid increasing unpopularity over its failure to tackle a floundering economy.

Shukrallah expressed concern over the widening government crackdown on dissent by jailing non-Islamist activists, including those who led the anti-Mubarak revolt.

“There should not be some kind of sweeping method in order to stop all kind of protest,” she told AFP.

“If this is the goal, then there is something deeply wrong with how this transitional period is being led.”

A government crackdown targeting supporters of Morsi and his Muslim Brotherhood meanwhile has killed more than 1,400 people since the ouster.

Shukrallah dismissed reconciliation with the Brotherhood, accusing it of being undemocratic.

But “if the democratic camp does not strengthen itself, it is very possible that at some point in the future we can again see…the Muslim Brotherhood come back to the political scene… which is a problem,” she said.

If the democratic camp was “strong… we would not have had the need for someone to fill the gap and that being the army”.