Nador - Translation has played a fundamental role bringing this genre to the attention of authors all over the world, including those in Morocco. 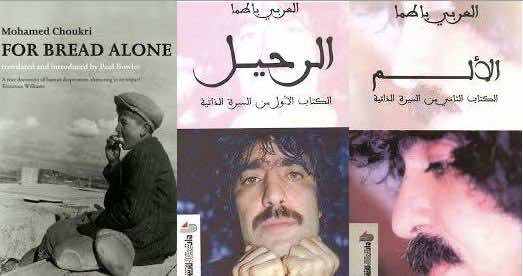 Nador – Translation has played a fundamental role bringing this genre to the attention of authors all over the world, including those in Morocco.

Notably, Mohamed Choukri, Mohamed El Harradi, Laarbi Batma, Bensalem Hamich, and Mohamed Zafzaf are representatives of the picaresque Moroccan novel. Though most critics have agreed that this genre has entered Moroccan literature, there is no unanimous agreement as to its name. To illustrate, some are satisfied with this Spanish word, namely Jamil Hamdaoui, while others have refused and coined new Arabic terms. For example, Ali Raai prefers to call it ‘the fraudulent novel’.

Models of the Moroccan Picaresque Novel

This section will summarize and analyze some of the best examples of picaresque Moroccan literature. To start with, For Bread Alone (1972) is an autobiographical novel that narrates the miserable childhood of Mohamed, a Rifi roguish character. Because of starvation in the Rif region, Mohamed’s family decides to move from Tangier, then to Teteouan. Mohamed lives on begging, petty theft, occasional works, smuggling, and even prostitution. His father is an alcoholic who beats him and everyone in the house. Worse, he causes the death of one of his sons. The only character who survives his father’s beatings, the pain of hunger, and the devils on the street is Mohamed. This rascal hero has made sex, drugs and alcohol his primary needs. To satisfy them, he fools, steals, and cheats both his family and other people. At the end of the story, the hero decides to learn to read and write to become a writer and lecturer of Moroccan Arab literature.

The events of Rooster’s Egg (1984), on the other hand, revolve around the life of a desperate jobless youth who runs away from his family because of his hate relationship with his father. The protagonist, in his ‘picaresque journey,’ makes acquaintance with various people from different social categories, including prostitutes, thieves, intellectuals, alcoholics and homosexuals. He willingly accepts to live under the mercy of a prostitute named Ghannou who pays his rent and satisfies his basic needs. The novel is structured in a way that it appears to be a collection of eight stories; each describes the subaltern character’s sordid life in a highly corrupt society. These stories are complementary, providing the reader with a general idea about the hero’s picaresque life.

Laarbi Batma’s autobiographical novels are another example of the Moroccan picaresque novel. Batma’s work contains two parts; the first part is entitled The Departure the second part, The Pain, was published three years later. In the first part, Batma describes his childhood, adolescence, family conditions, and academic failure in high school, as well as his prison experience. Afterwards, the novelist highlights his post-prison life that he spends on the edge of society. In order to survive in his oppressive society, the protagonist resorts to illegal practices such as tricking, cheating and stealing people’s properties. Like his brutal alcoholic father Rahal, the hero is also addicted to alcohol, sex, drugs, and smoking. The main character, after his failure to find a steady job, discovers that the most suitable place for him is theatre, and begins performing in plays both in Morocco and in France. At the end, Batma founds the famous band- Nas-Lghiwan. The second part of Batma’s autobiography depicts the novelist’s suffering from the Cancer that led to his death.

Mimoun Lhassani’s Fog Roots, is another relevant example of the picaresque novel. The story sheds light on a number of marginalized frustrated tramps in Bni Sidal, a region in a North-eastern Moroccan city called Nador. Baghdad, the main character, is depicted as being alone, miserable, and poor. The events of the story take place during the Spanish colonialism that has led to many social, economic and political troubles. Thus, hunger, tribal wars, poverty and joblessness are the dominant themes in the novel. Baghdad tries to find a steady job, but he does not succeed. In order to escape from this unbearable reality, he decides to immigrate to Algiers where he works in the gardens supervised by the French. He saves some money and returns to his country to be with his mother, where he continues to waste his time and money with other tramps and unemployed gangs. Baghdad ends up as a sexually repressed rapist. By the end of the story he falls in love with a girl named Nonja who refuses to marry him.

Features of the Picaresque in the Moroccan Novel

All of these novels were written in a period of dramatic socio-political and economic changes in the Moroccan society. The time immediately following independence until 1960 was a period of stagnation due to the lack of social and political stability. Moroccan intellectuals were waiting for change so that they could write about their position as well as the Moroccan experience during colonialism. Things went from bad to worse from the seventies to the nineties; a period characterized by domestic frustration and disappointment. This period witnessed the emergence of new literary trends that show the influence of the Spanish picaresque novel, the theatre of the absurd, and the philosophy of existentialism. Thus, novels produced in such conditions are said to be picaresque, realist, and subversive, as most of them highlight issues related to “the frustrated intellectual’s crisis,” As Akbib’s phrases it.

The most recurrent themes that constitute the picaresque Moroccan novel are the conditions of marginalized jobless classes, the alienated intellectual, social hypocrisy, and injustice. “Reality”, in such a context, tends to be scrutinized with the eyes of these marginalized groups who struggle to survive. This has given birth to protagonists like those in Lazarillo De Tormes who have experiences and expectations that are in juxtaposition with those of the classical novels, where heroes are portrayed as the symbol of goodness and success.  It is clear that the aforementioned novels can be said to be picaresque because they all share important structural features with Lazarillo De Tormes. The picaresque novel, in both its Spanish and Moroccan versions, is the product of socio-political corruption and cultural schizophrenia. Furthermore, as in the Spanish picaresque novel, Moroccan stories that belong to this genre have repudiated traditional literary canons that used to limit their creativity.

The protagonist in the picaresque Moroccan novels is always in rebellion against taken for granted beliefs and values, and even against parents and predecessors. Instead, they are in agreement with all that is forbidden and looked at as being bad and immoral. For example, the protagonists of Mohamed Choukri, Laarbi Batma, Mimoun Hassani and Mohamed Zefzaf choose alcohol, shelter, drugs, sex, and banditry life styles, and also as a means to escape the brutality of their society. These characters’ relationship to their family, especially their fathers, is characterized by coldness, brusqueness, and lack of communication. This can be manifested in one of Zafzaf’s letters to Choukri where he wrote: “Dear Choukri, honestly I miss you these days. I think I am the only one who understands you, it’s not only because I have the capacity to understand some people. But, it’s because I am too ‘muskhut’ or cursed. We, cursed people, understand each other with an incredible ease. I have eagerly read your letter; persist against your father….”