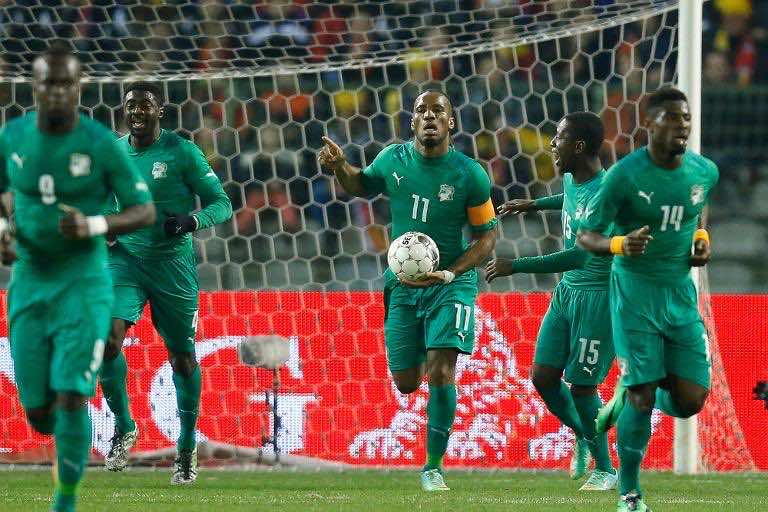 Striker El-Hilal Soudani put Algeria ahead in first-half stoppage-time and Inter Milan midfielder Saphir Taider added a second goal for a 2-0 victory over Slovenia in Blida.

It was an encouraging result for the Desert Foxes, at a ground where they are almost invincible, ahead of facing Belgium, South Korea and Russia in Group H during June’s football showpiece event.

Substitutes Didier Drogba and Max Gradel scored as Ivory Coast came from two goals behind to hold Belgium 2-2 in Brussels.

Marouane Fellaini and Radja Nainggolan struck before Drogba halved the deficit on 74 minutes and Gradel snatched the stoppage-time equaliser.

After first round exits in 2006 and 2010, Ivory Coast got a kinder Cup draw this time, sharing Group C with Colombia, Greece and Japan.

Ghana had first-choice centre-backs John Boye and Jonathan Mensah back from lengthy injuries only to lose 1-0 away to lower-ranked Montenegro in Podgorica.

The Black Stars, who face a daunting Group G mission against Germany, Portugal and the United States, were undone by a first-minute penalty Dejan Damjanovic converted.

Cameroon crumbled 5-1 to Portugal in Leiria, where Real Madrid superstar Cristiano Ronaldo opened and closed the scoring in a game of contrasting halves.

Vincent Aboubakar levelled just before half-time only for the Indomitable Lions to be overrun during the second half by the fourth-ranked team in the world.

Samuel Eto’o-skippered Cameroon are in Group A at the World Cup with Brazil, Croatia and Mexico and few pundits give them a chance of survival.

Non-World Cup qualifiers Egypt, Guinea, South Africa and Tunisia met teams who will be in Brazil, with mixed results.

It was a great start for Egypt coach Shawky Gharib after many years as assistant to Hassan Shehata and, later, American Bob Bradley.

Mohamed ‘Gedo’ Nagy put the Pharaohs ahead on 52 minutes in Innsbruck and Mohamed Salah added a second soon after.

Kevin Constant and Ibrahima Traore were the Guinean first-half scorers in Iran, who pulled one goal back during the second half.

After falling behind to a James Rodrigues penalty against Colombia, Tunisia recovered under caretaker coach Nizar Khanfir and Mohamed Khazri levelled before the break.

Other friendlies featured teams preparing for 2015 Africa Cup of Nations qualifiers and the stand-out performance came from Zimbabwe against Malawi.

There was late drama in Windhoek as Mcha Hamis gave Tanzania an 88th-minute lead and Panduleni Nekundi equalised deep in stoppage time.