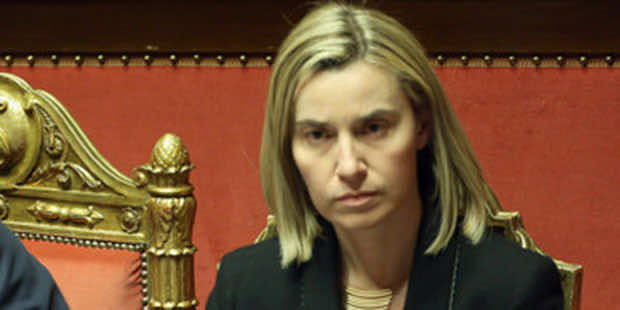 Mogherini told Libyan Prime Minister Ali Zeidan and a large delegation of foreign ministers in Rome that “international partners are ready to help Libya”, but the “uncontrolled circulation of arms” in the country was creating difficulties.

The talks, attended by US Secretary of State John Kerry, were being held to weigh assistance for the transitional authorities in Libya.

In February, France had ruled out Western military action against Islamist fighters in southern Libya — a region that the United States has identified as an increasingly worrisome new haven for Al-Qaeda-linked militants.

But Foreign Minister Laurent Fabius said the Western powers were aware of the problem and were drawing up plans to help the Libyan government deal with it.

The Rome meeting intends to find a way “to give Libya more help because it’s true that there are terrorists gathering in the south,” he said.

Mogherini stressed the importance of acting now to avoid the high price Libya would pay if international patience runs out.

“There are no shortcuts, the solution for Libyan stability will come from Libya,” she said, adding that “our commitment cannot last for ever”.

More than two and a half years after dictator Moamer Kadhafi’s downfall, Libya’s transitional authorities have struggled to integrate former rebels into the police force and army.

Security forces are regularly attacked, especially in the east, and the presence of rival ex-rebel groups, heavily armed with weapons looted from Kadhafi’s arsenals, could yet push Libya into civil war.