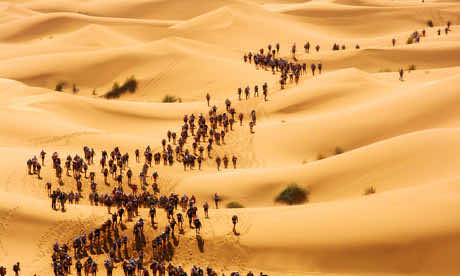 By
Aziz Allilou
-
Aziz Allilou is a student at the Higher Institute of Media and Communications (ISIC) and Morocco World News correspondent in Rabat.
Mar 7, 2014
Spread the love

Rabat-Over a thousand Athletes to Participate in the 29th Marathon des Sables.

The marathon organizing committee reported that over 1,079 athletes representing approximately 45 countries will take part in the 29th annual “marathon des sables,” which will take place from April 4th to 14th in southern Morocco.

Gathering the biggest athletes in the world, the 29th “le Marathon des Sables”, or Marathon of the Sands will attract more than one thousand competitors to the Moroccan Sahara.

According to Moroccan daily newspaper Assabah, the participants in the marathon will represent various age brackets, from 16 to 76, and diverse professions, including doctors, professional athletes, business managers, students, and retirees.

Marathon manager Patrick Bauer said that the 29th marathon will feature “the participation of 165 women”.

Enjoying the diversity of the Moroccan landscape, the athletes will run in 250 km in six stages through the most beautiful Moroccan topography, including mountains, oases and desert.

This event aims to highlight the beauty and natural wealth of southern Morocco for thousands of runners and millions of T.V. viewers worldwide.