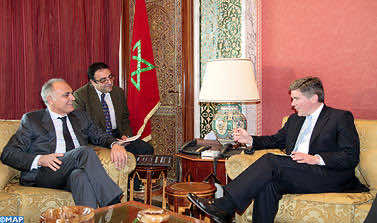 Rabat- Morocco and the UK expressed, on Monday in Rabat, their determination to give momentum to bilateral relations and partnership.

In a statement to the press following a meeting with foreign minister Salaheddine Mezouar, the British Minister in charge of Middle East and North Africa Hugh Robertson said the talks are part of efforts made by Morocco and the UK to give new impetus to their cooperation ties and partnership.

Noting that the long-standing relations of friendship between the two kingdoms are becoming stronger over time thanks to the cooperation between the two countries, the British official said his country seeks to develop its cooperation with Morocco in different areas.