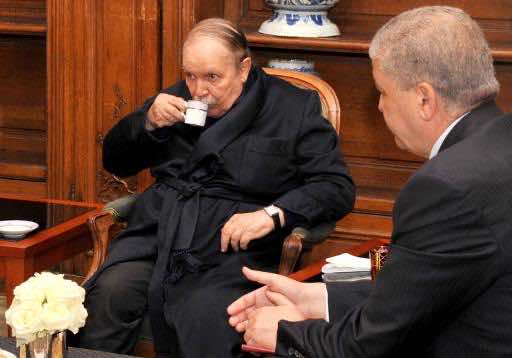 “Djamel Ghanem was acquitted. Justice has been done after all the irregularities there were in this case. I’m very happy,” lawyer Youcef Dilem said.

Ghanem was accused at the criminal court in Oran last month of insulting the president, with the prosecution demanding an 18-month prison sentence and a 30,000 dirham (280 euro) fine.

The complaint was filed by his own employer, pro-regime daily La Voix de l’Oranie (Voice of the Oran Region), for a drawing that was to appear in the newspaper on September 30, 2013 but which was never published.

Dilem said the cartoon referred to 77-year-old Bouteflika’s decision to seek a fourth term in office in April’s leadership contest, a move which has sparked anger and derision in Algeria due to his fragile health.

Hospitalised for three months in Paris last year after suffering a mini stroke, Bouteflika has made very few public appearances since he returned in July.

Earlier this month, he was shown on state television sitting in an armchair, his voice barely audible, as he registered his candidacy for the election.

Freedom House, a US NGO that monitors press freedom, classifies Algeria’s press status as “not free,” saying self-censorship is widespread, “motivated largely by a fear of defamation accusations or other forms of government retaliation.”