Agadir — Spain's Alejandro Canizares carded a 62 to carve out a one-shot lead over England's Seve Benson on a windswept opening day at the Trophee Hassan II on Thursday. 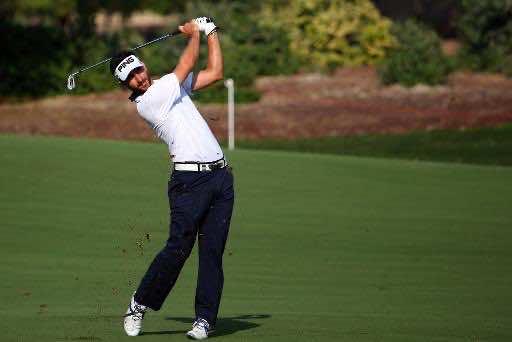 Agadir — Spain’s Alejandro Canizares carded a 62 to carve out a one-shot lead over England’s Seve Benson on a windswept opening day at the Trophee Hassan II on Thursday.

Canizares hit 11 birdies against just a single bogey to take an early edge over Benson, the golfer named after Spanish legend Seve Ballesteros and who is seeking a first European title in his 104th tournament.

“It was one of those days for me, my swing felt great, I started putting well and the putts went in,” said Canizares after his 10-under score.

The 31-year-old, with a single European Tour title to his name thanks to the 2006 Russian Open, credited hard work for his round on Thursday.

“I was lucky that after a couple of sessions with my coach and a putting session with Phil Kenyon this week it’s started getting a lot easier so I am very happy to perform well this week.

“I think I played one of the best rounds I’ve played. I missed a couple of drives and from the fairway I missed one shot that cost me a bogey, but that was about it I think.”

Benson, 27, carded a round of 63 that featured birdies at his last four holes, while Sweden’s Magnus A Carlsson and Connor Arendell of the United States are a shot further back.

Arendell finished eighth at Qualifying School in November to earn his card for this season, but missed the cut in his first four events of 2014.

“It’s a great start,” said the 23 year old from Florida. “I gave both tours a try, Q-School wise, but I just think this is the best thing for me now that the PGA has done away with getting your card (through qualifying).

“I think it’s huge, coming over here getting that experience, the travelling; week to week the courses vary quite a bit compared to the US so you are working a lot on getting used to the greens and the courses. It’s tough, but I think over time it will make it that much easier when I’m in the US.”