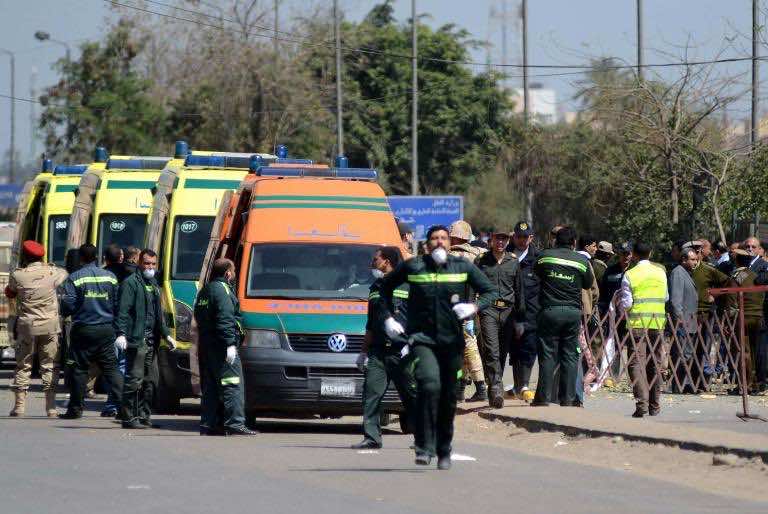 The attack came two days after gunmen killed a soldier in Cairo, as militants once based in the Sinai Peninsula increasingly target the capital in a campaign that has killed more than 200 security men since the army overthrew Morsi last July.

The assailants opened fire on military policemen Saturday as they were finishing their morning Muslim prayers and then planted two bombs to target first responders, a military statement said.

The soldiers appeared to have had little opportunity to defend themselves.

The health ministry said six of them were killed.

Live television footage showed military sappers safely detonating one of the bombs near the checkpoint in the northern neighbourhood of Shubra al-Kheima.

And a private television station quoted an interior ministry official as saying one of the bombs left behind was planted next to a dead soldier’s body.

About two dozen civilians gathered near the site and chanted: “Either we get justice for them, or we die like them.”

Most of the attacks since Morsi’s ouster have taken place in the Sinai, but militants have expanded their reach to the Nile Delta and the capital in recent months.

The government has blamed most of the attacks on Morsi’s Muslim Brotherhood, which renounced violence decades ago and has denied any involvement.

“An armed group belonging to the terrorist Muslim Brotherhood attacked a military police checkpoint,” the military said of Saturday’s attack.

The most prominent attacks, including a car bombing at a police headquarters in Cairo and the downing of a military helicopter in Sinai, have been claimed by Ansar Beit al-Maqdis (Partisans of Jerusalem), a Sinai-based jihadist movement.

The group said in a statement Friday that one of its founders, Tawfiq Mohamed Fareej, died last week when a car accident set off a bomb he was carrying.

Fareej led a 2011 cross border attack in Israel that killed eight people, and was also involved in the failed assassination of Egypt’s interior minister, the statement said.

The group has said the attacks in Egypt are in retaliation for a brutal government crackdown on Morsi’s Islamist supporters, which Amnesty International says has claimed some 1,400 lives.

But his year in power bitterly polarised Egyptians, and the military ousted him amid mass protests demanding his overthrow.

Since his ouster and subsequent arrest, his supporters have staged weekly rallies that often set off deadly clashes with security forces and Morsi opponents.

Meanwhile, the army has poured troops and armour into the lawless Sinai to combat the growing militancy, often targeting suspected gunmen with air strikes.

Analysts say the army campaign has led the jihadist militants in Sinai, some inspired by Al-Qaeda, to adapt by staging less frequent but more widespread attacks across the country.

With the Brotherhood decapitated by the crackdown, some of its members might also have decided to form militant cells to target policemen.

Militants have conducted a series of assassinations of police officers in the Nile Delta, including of a policeman who guarded one of the judges overseeing Morsi’s trial.

Morsi, who is still in jail, faces three separate trials for involvement in the killing of opposition protesters and collusion with militants to carry out attacks in the country.