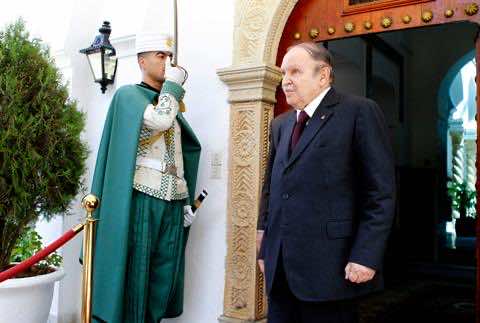 The 77-year-old’s decision to seek re-election had been expected despite concerns over his health after he was hospitalised for three months in Paris last year because of a mini-stroke.

Around 3,000 supporters of the president gathered in the capital for what they called “a national meeting to sensitise young people to voting”.

They screened a documentary about Bouteflika’s 15 years in power, and his former premier and election campaign manager Abdelmalek Sellal gave a speech.

At the same time but on the other side of the city, hundreds of opponents of Bouteflika’s re-election bid also held peaceful marches.

Three different opposition marches took place, with the largest biggest organised by the Barakat (Arabic for “That’s enough”) movement, which was formed specifically to oppose Bouteflika seeking another term.

The protesters marched under the slogan “Enough of this election masquerade”.

In the south, meanwhile, intercommunal clashes raged in a neighbourhood of Ghardaia for a fifth consecutive day, and the city centre was like a “ghost town”, sources said.

The city of 90,000 inhabitants has been rocked since December by clashes between the Chaamba community of Arab origin and the majority Mozabites, indigenous Berbers belonging to the Ibadi Muslim sect.

“Hundreds of people are continuing to clash in the mixed neighbourhood of Hadj Messaoud,” regional official Mohamed Tounsi told AFP by telephone.