Simferopol (Ukraine)- Crimeans voted overwhelmingly Sunday in favour of joining former political master Russia as tensions soared in the east of the splintered ex-Soviet nation amid the worst East-West crisis since the Cold War. 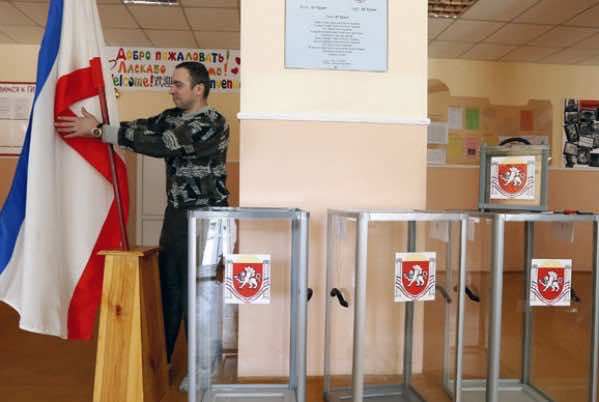 Simferopol (Ukraine)- Crimeans voted overwhelmingly Sunday in favour of joining former political master Russia as tensions soared in the east of the splintered ex-Soviet nation amid the worst East-West crisis since the Cold War.

Exit polls cited by local officials showed 93 percent of the voters in favour of leaving Ukraine and joining Russia in the most serious redrawing of the map of Europe since Kosovo’s 2008 declaration of independence from Serbia.

“I am happy. Honestly, I’m 60 and I never thought I would live to see this happy day,” said Alexander Sorokin as he strolled the waterfront of Sevastopol — home of tsarist and Kremlin navies since the 18th century and a city that like most of the peninsula is heavily Russified.

Ukraine’s new pro-European leaders and the West have branded the vote as “illegal” because the strategic Black Sea peninsula has been under de facto control of Russian forces since the start of the month.

The options facing voters were either to join Russia or go back to a 1992 constitution that effectively made Crimea into an independent state within Ukraine. Retaining good relations with Kiev was not an alternative.

International condemnation of the referendum began pouring in from world capitals even before the polls had closed.

US Secretary of State John Kerry demanded that Moscow pull back its forces to their bases in Crimea in return for constitutional reforms in Ukraine to protect minority rights.

A US State Department official said Kerry told Russian Foreign Minister Sergei Lavrov in a phone call that “as Ukrainians take the necessary political measures going forward, Russia must reciprocate by pulling forces back to base.”

The European Union said it would be deciding on sanctions against Russia on Monday that include the possible seizure of the foreign assets of top Kremlin officials and travel bans for senior ministers.

“We reiterate the strong condemnation of the unprovoked violation of Ukraine’s sovereignty… and call on Russia to withdraw its armed forces to their pre-crisis numbers,” the EU said in a statement.

But Russian President Vladimir Putin — accused of orchestrating the vote as a way of seizing Ukranian land and punishing its leaders for spurning closer relations with Moscow — said he would “respect” its outcome.

The Russian tri-colour was flown all over Crimea amid a festive atmosphere that reflected a profound mistrust of the new Kiev leaders through the largely Russified southeast of the nation of 46 million people.

“This is a historic moment,” Crimea’s self-declared premier Sergiy Aksyonov told reporters after casting his ballot in the regional capital Simferopol.

Cossacks and pro-Moscow militias were patrolling outside polling stations and Russian troops guarded the unofficial border between Crimea and the rest of Ukraine.

Pro-Russian groups in favour of holding a similar referendum in the flashpoint eastern industrial city of Donetsk stormed the local security and legal headquarters demanding the release of their self-appointed “governor”.

Ukraine’s interim President Oleksandr Turchynov — in power since last month’s ouster and flight to Russia of Kremlin-backed Viktor Yanukovych — also accused Russia of fanning tensions in eastern Ukraine as a way of justifying an invasion.

“The result has been pre-planned by the Kremlin as a formal justification to send in its troops and start a war that will destroy people’s lives and the economic prospects for Crimea,” he said.

There were signs however of a possible easing in Crimea as Ukraine said its forces on the peninsula had reached a temporary truce with Russia to lift the blockade around Ukrainian bases.

But AFP reporters saw no sign of the agreement being implemented at the Perevalnoye base outside Simferopol as Russian forces stood rooted in place.

Three people have died in clashes between nationalists and Russian supporters in Ukraine’s southeast since Thursday — the first fatalities since nearly died in a week of carnage in Kiev last month — and the region remained fraught with tensions as Crimeans voted to join Kremlin rule.

Around 4,000 pro-Moscow activists rallied in Donetsk to support Crimea’s referendum and 6,000 turned out in Kharkiv with a large Russian flag and a sign reading “Our Homeland is the USSR”.

Not everyone in Crimea was happy to return to Russia for the first time since peninsula was symbolically gifted to Ukraine by Soviet leader Nikita Khrushchev in 1954.

Some Crimeans said they would spoil their ballots in protest and there was a call on social media for people to cook vareniki — Ukrainian dumplings — instead of going out to vote.

Crimean authorities denied irregularities but accredited journalists including AFP were prevented from entering some polling stations in the port city of Sevastopol and in Simferopol. Several people were seen voting before polls opened.

Foreign observers were present although the Organisation for Security and Cooperation in Europe (OSCE) said it would not monitor because it was not officially invited by Ukraine’s national government.

“Of course we are not going to vote,” said community leader Dilyara Seitvelieva in the historic Tatar town of Bakhchysaray.

“The situation is very dangerous.”

But the sentiment was vastly different among ethnic Russians.

“We have waited years for this moment,” said 71-year-old Ivan Konstantinovich.

Preparations to become part of Russia — a process that could take months — are to begin this week.

Russian lawmakers are also expected on Friday to debate legislation that would simplify the process under which the Kremlin can annex a part of another state.

There has been no armed confrontation between Russian and Ukrainian forces but there have been several incidents involving journalists and pro-unity activists condemned by Amnesty International as “extremely worrying”.

The authorities are calling the vote a “Crimean Spring” but many locals are concerned about a possible legal vacuum and economic turmoil.

One immediate worry is about the availability of cash and there have been long queues outside banks with Crimeans rushing to withdraw their money.

Ukraine’s government has said Crimea cannot survive since it depends on electricity as well as energy and water supplies from the mainland.

Bakhchysaray native Anna Ivanovna, 70, said she had voted to join Moscow, but was apprehensive.

“Yes, we will be Russians. It’s good but at the same time, at my age, it’s hard to change countries.”