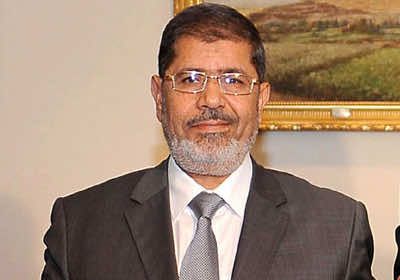 CAIRO – A son of deposed Islamist president Mohammad Morsi will face trial for alleged possession and use of hashish, judicial sources said on Monday, but no date has yet been fixed.

Abdullah Morsi, 19, was arrested on March 1 along with a friend for allegedly possessing two joints while they were in a car parked by the roadside in Qalyubia province north of Cairo.

The two were freed the next day pending investigation after agreeing to give urine samples which the prosecution says tested positive.

Morsi’s other son Osama has denied the charges against Abdullah, saying the authorities were “fabricating the case” and that his brother’s arrest was an attempt to “defame the family”.

Morsi and his Muslim Brotherhood have been the target of a relentless government crackdown since the Islamist was ousted last July after just a year in office.

Amnesty International says that more than 1,400 people have been killed, mostly Morsi supporters, in street clashes since his ouster.

Morsi himself and several Brotherhood leaders have been put on trial on charges that could lead to the death penalty.