GHARDAIA, Algeria - Daily life has ground to a halt in Ghardaia, a picturesque Algerian city on the edge of the Sahara turned into a ghost town by a wave of sectarian violence. 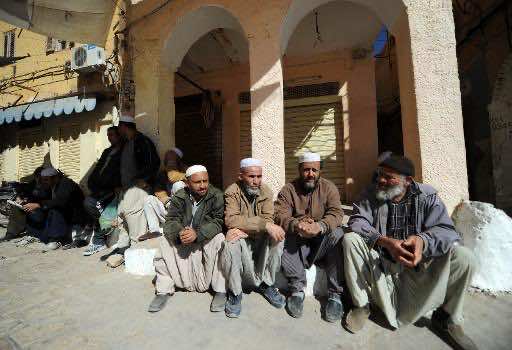 GHARDAIA, Algeria – Daily life has ground to a halt in Ghardaia, a picturesque Algerian city on the edge of the Sahara turned into a ghost town by a wave of sectarian violence.

The UNESCO world heritage site, some 600 kilometres (370 miles) south of Algiers, has been rocked since December by clashes between the Chaamba community of Arab origin and the majority Mozabites, indigenous Berbers belonging to the Ibadi Muslim sect.

The oasis settlement, with its 90,000 inhabitants, was a scene of desolation on Monday, with the normally bustling market square empty and charred shopfronts bearing witness to last week’s unrest.

Security forces patrolled the streets following the deployment of extra personnel, and after Algeria’s newly-appointed premier Youcef Yousfi visited on Sunday in a bid to defuse the situation.

The latest violence erupted after hundreds of Mozabites who had fled during the initial unrest returned to their houses, to find many of them destroyed or badly damaged, according to various local sources.

Three young Chaambas were killed on Saturday night, in circumstances that remain unclear, and another 190 people wounded, including 29 members of the security forces, according to medical sources.

Five people were killed in the previous wave of violence between the rival communities, between December and February.

Hamou Mesbah, a senior member of the opposition Socialist Forces Front (FFS), on Saturday described the centre of Ghardaia as a “ghost town,” saying that Mozabites living in mixed neighbourhoods whose property had been torched were still waiting to recover whatever belongings they could.

Some of the burnt-out shops belonging to members of the Chaamba community were still smouldering on Sunday night, despite the efforts of the local fire service.

Hadj Mabrouk Zahouani ran the well-known store “Rahala” (“Journey” in Arabic), which opened its doors in 1950 but was left in ruins by last week’s violence.

Before the unrest customers would come from all across the Algerian desert to purchase his wares, which ranged from kitchen dishes to traditional clothes and footwear.

“I didn’t close my shop until the riots began (in December), and when things calmed down I reopened. This time I have lost the shop and its contents,” Zahouani told AFP.

The total damage from the latest violence is difficult to evaluate, but Bahmed Babaoumoussa, a member of the committee for Thenia neighbourhood, put the cost of the losses there alone at more than four million euros.

The shops along the town’s main street, most of them Arab, were all shut on Monday.

“The Mozabites don’t live in the town centre but they do have shops here,” said Moussa, a postman in his 30s.

On Monday those shops were easy enough to identify, whether by the police guards deployed outside them or the hostile messages scrawled on their walls, such as: “This is a Mozabite shop,” and “Get out.”

The two communities have coexisted for centuries, but as elsewhere in the region, limited economic opportunities, despite the proximity of Algeria’s vast oil and gas wealth, have aggravated social tensions.

Trade has always been Ghardaia’s economic mainstay, and one police officer posted on the deserted main street said he couldn’t imagine the town without its shops and bustling business.

For 30 years tourism has flourished here, he said, driven in particular by demand for the jewelry and carpets typical of the area, which is also famous for its ksour, or traditional villages.

Saleh Echeikh, a professor at Ghardaia university, blamed the communal violence on a “third party”, accusing criminal gangs linked to theft and drug dealing of instigating the clashes.

“They have forced the shops to shut and brought commercial activity to a standstill by all their acts of aggression,” he said.

But others, particular members of the Chaamba community, dismiss this argument.

“Drugs circulate even more in the main cities and towns along the coast. So why aren’t they going up in flames?” one man asked.