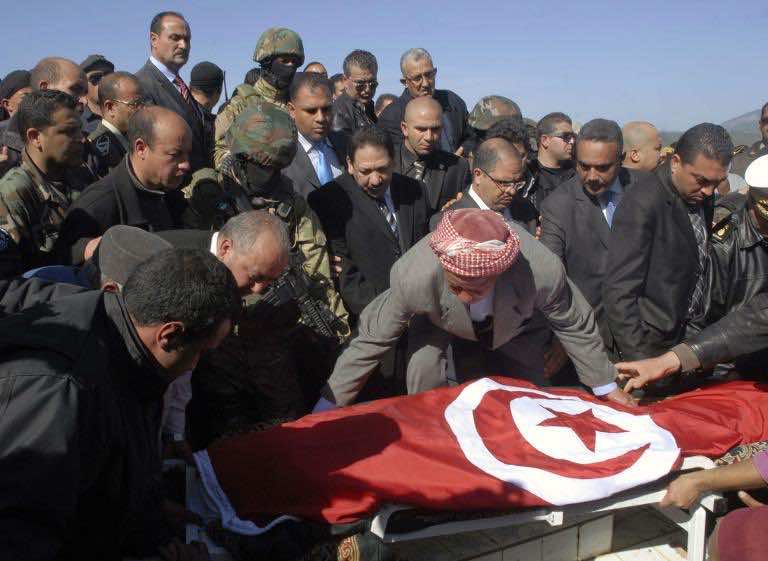 Special police units surrounded the house of a “takfirist”, or Muslim extremist, in the northwest Jendouba region near the Algerian border at around 0200 GMT, ministry spokesman Mohamed Ali Aroui told reporters.

“The terrorist group threw a grenade at the agents… and an exchange of fire followed between the security forces and these members of a banned movement,” he said, alluding to the radical Islamist group Ansar al-Sharia.

Three militants were killed in the clash, “one of whom was very dangerous,” and two police agents were wounded.

Two of those killed were Tunisian and the third was foreign, possibly Algerian, Aroui said.

Six others, including women, were arrested for providing logistical support to the group.

Tunisia has been rocked by sporadic attacks blamed on jihadists since the 2011 revolution that toppled a decades-old dictatorship and touched off Arab Spring uprisings across the region.

In central Sidi Bouzid, three policemen were wounded on Sunday night in a clash with gunmen travelling by car who refused to stop at a checkpoint and were chased, a security official said.

The policemen were hit in the exchange of fire that followed, and one was left in serious condition with chest wounds, a medical source said.

Much of the deadly violence in Tunisia since the uprising has been blamed on Ansar al-Sharia, a hardline Salafist movement which the authorities have linked to Al-Qaeda and blamed for the killing of two opposition politicians last year.

The group never claimed responsibility for those attacks, which plunged the country into turmoil.

Tunisian authorities last month claimed major success in their battle against Islamist militants, announcing that they had killed or arrested various heavily armed jihadists, including the suspected assassins of the two politicians.

The news came shortly after lawmakers adopted a new constitution in late January and an interim government of technocrats was formed, tasked with restoring stability and leading Tunisia to fresh elections.