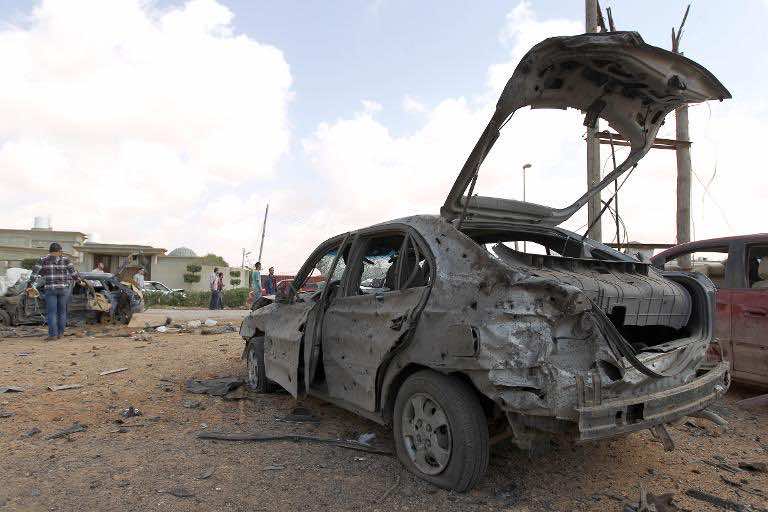 Benghazi, cradle of the 2011 uprising that toppled veteran Libyan dictator Moamer Kadhafi, has seen near-daily attacks on security and other targets in recent months as the weak Tripoli government struggles to rein in former rebel brigades turned militias.

The medical centre in Benghazi said “seven bodies have arrived at the hospital in addition to an undetermined number of human remains,” updating a previous toll.

A hospital spokesman said 12 people were wounded in the bombing, including six in serious condition.

A military source said the car parked in front of the academy blew up as soldiers emerged from an awards ceremony for army promotions.

The explosion left a one-metre (three-foot) deep crater and damaged around 20 cars parked nearby.

Car parts and scraps of military uniforms could be seen several metres (yards) away.

As with previous attacks, it was not clear who carried out the bombing and there was no claim of responsibility.

The government condemned the “criminal” and “terrorist” act and declared three days of mourning.

“The government has not and will not spare any effort to pursue those behind this crime and bring them to justice,” it said in a statement.

In a separate incident Monday, a man was killed elsewhere in Benghazi by a bomb that had been attached to his car, a security source told AFP, adding that the deceased has not yet been identified.

Militants have also attacked foreign missions in Benghazi, including a September 2012 assault on the US consulate in the Mediterranean city that killed the ambassador and three other Americans.

On March 2, gunmen shot dead a French engineer in Benghazi.

Eastern Libya has become a bastion of Islamist extremists, with authorities avoiding a full-blown confrontation with heavily armed former rebels pending the formation of a regular army and police force.

The government has struggled to consolidate control in the vast and mostly desert country, which is effectively ruled by a patchwork of local militias and awash in heavy weapons looted from Kadhafi’s arsenals.