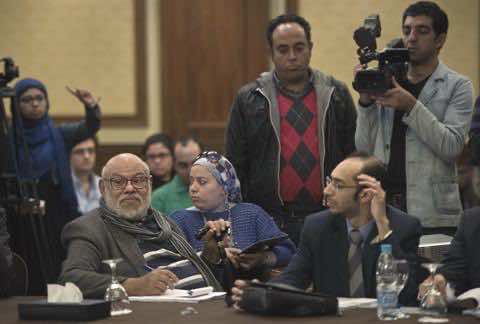 The press conference was called by the Islamist Anti-Coup Alliance in response to an official report on a deadly police crackdown on pro-Morsi protest camps in August.

An activist of the Islamist group said two organisers were arrested. Security officials confirmed the police intervention but not the arrests.

Police dispersed two Islamist protest camps in Cairo on August 14, a month after the army overthrew Morsi, killing hundreds of his supporters in clashes.

The National Council for Human Rights said in a report released on Monday that 632 people were killed in one of the protest camps, including eight policemen.

It said that exchanges of fire erupted after “some armed elements suddenly opened fire” and killed an officer calling on protesters to disperse.

Tuesday’s pro-Morsi press conference was called to “reply to the falsified claims” made in the report, an email invitation said.

More than 1,400 people have been killed in the crackdown on Morsi’s supporters, according to Amnesty International.

Thousands more, including Morsi and most of the leadership of the Muslim Brotherhood, have been detained.