New York - UNESCO general director, Irina Bokova, paid tribute to King Mohammed VI for his efforts to promote nomadic culture and commended the Sovereign's support to a new maritime expedition developed in Morocco for scientific research and rapprochement between people. 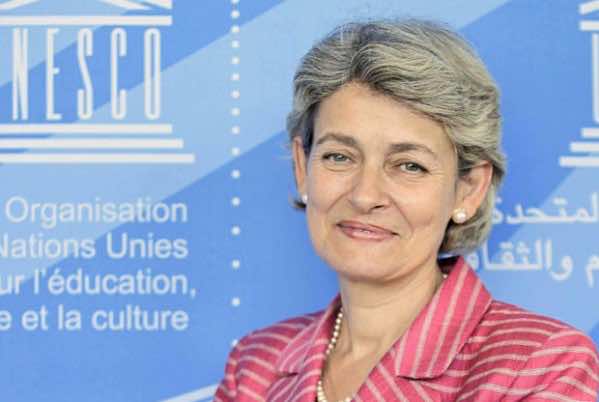 New York – UNESCO general director, Irina Bokova, paid tribute to King Mohammed VI for his efforts to promote nomadic culture and commended the Sovereign’s support to a new maritime expedition developed in Morocco for scientific research and rapprochement between people.

In a video broadcast at the New York “Explorers Club” annual gala held over the week end, Bokova expressed “gratefulness” to the King for action at the services of the diversity of human cultural expressions, mainly the Moussem of Tan Tan, included in the human cultural and immaterial legacy.

She also commended the Sovereign’s backing to scientific research through his support to a new maritime expedition between Africa and the new world.

The expedition, onboard primitive reed boats, seeks to bridge gaps between people and promote human legacy.

“I cannot dream of a better location to announce the new World discovery Expedition, co-sponsored by Morocco and the UNESCO, dedicated to preserving human immaterial natural and cultural legacy”, she told guests at the Club’s annual gala.

The expedition to be led by explorer and UNESCO goodwill ambassador, Kitin Munoz, will set out next year from the Moroccan coasts to land in New York.

This expedition, which will fly the flags of UNESCO, Morocco and the Club of Explorers, would not have been possible without “the commitment of His Majesty the King, and his constant concern for rapprochement and reconciliation between people”, said Moroccan ambassador and chairman of the “Al Mouggar” Foundation for the preservation of the Tan Tan Festival, Fadel Benyaich.

The Club of Explorers was founded in New York City in 1904 to promote the scientific exploration of land, sea, air, and space by supporting research and education in the physical, natural and biological sciences.

During the Gala dinner, the Club awarded its highest distinction to King Mohammed VI, in recognition for his “vision and leadership” in promoting exploration and discoveries.