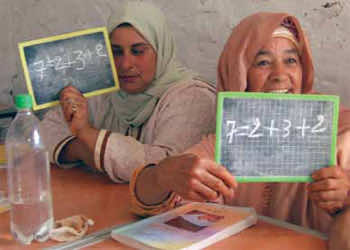 By
Larbi Arbaoui
-
Larbi is a freelance writer and assistant editor at Morocco World News.
Mar 19, 2014
Spread the love

Taroudant, Morocco- According to a report of the High Commissioner for Planning released last week, nearly 53% of Moroccan women can neither read nor write.

More than half of Moroccans in “working age” (15 years and older) are illiterate, despite the various literacy programs implemented in recent years, according to an AFP report on a study of the High Commission for Planning entitled “Moroccan women and the labor market: characteristics and evolution.”

According to the same report, many rural women have entered the labor market before they were 15 years old, “a reality that has undoubtedly a negative impact on enrollment.”

The same source added that that more half of working women (59.5%) work in the agriculture sector.

In an attempt to fight illiteracy, the Moroccan government launched many literacy programs in cooperation with the European Union and various NGOs during the past decade.

These efforts have helped reduce the rate of illiteracy in Morocco. More than six million people have benefited from the literacy programs.  80% of the beneficiaries were women from rural areas, according to the same source.