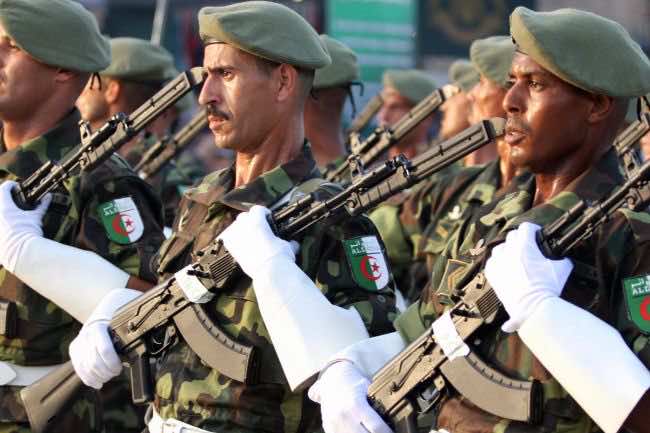 Neither South Africa nor Nigeria nor any other oil producing or non-producing, democratic or despotic country has overtaken them.  Algeria has the gold medal and Morocco the silver medal.

While the two countries may congratulate each other, hoist their flags, and sing their anthems, the border between the countries has been closed for 20 years and the two countries lose 1.5% of growth annually due to the closed border, letting only the donkeys pass the border with Algerian oil to Morocco.

The International Institute of Peace Research of Stockholm, specializing in the global arms trade, said yesterday that Algeria ranked in first place among African countries weapons purchases in 2009-2013, while Morocco occupied second place for the same time frame.

Further details about the rankings of the two enemy countries in this trade of death indicate that Algeria, due to its energy resources, is the 7th country in the world in the purchase of weapons as the country is engaged in a third “world war,” while Morocco is in 10th place in the world. While the two countries rank high in arms purchases, the two nations rank last when it comes to human development, human rights, transparency, the fight against corruption, and business.

Morocco’s main suppliers are France, China, America, and Spain. Algeria’s suppliers are Russia, France, United States, China and Spain.  The major arm-producing countries sell everything to everyone, especially those who give priority to weapons over education, health, economic infrastructure, and the quality of life.

As stated by by the late French comedian Coluche describing countries that claim to be neutral and selling weapons to those who ask:“A neutral country is a country that doesn’t’t sell weapons to a country that is at war unless it pays cash.”

Hostility marks the relationship between the two countries and that, along with the cold war they are engaged in, are the two reasons that drive them to run after weapons, weapons that will not be used, but even if –which God forbid –they were used, it would not change the balance of power on the borders or anywhere else.  An armed confrontation would only destroy the capacity of the two belligerents whether because of an effective war that lasted only a few weeks or a cold war that would take more time to achieve the same result.

Nevertheless, the statistics of weapons purchases may serve as evidence to condemn the elites of the two countries…elites who, since the independence in 1956 and 1962, have failed to “weave the same Maghreb djellaba” for all, despite all the factors that bind the populations.

If the region is becoming more a jungle, it is not necessary that we become animals that are looking for the fight at all costs. Stop! Enough!  Let Algeria race against itself by buying more weapons, and let Morocco make the choice of acquiring more weapons— weapons of science and conscience, weapons of knowledge, economics, development, democracy, freedom and wealth, which have more power than missiles, fighters and cannons.