Tangier -  King Mohammed VI launched, Friday in Tangier, the construction works of important infrastructure projects that reflect his commitment to modernizing the city to be fit for a major international city. 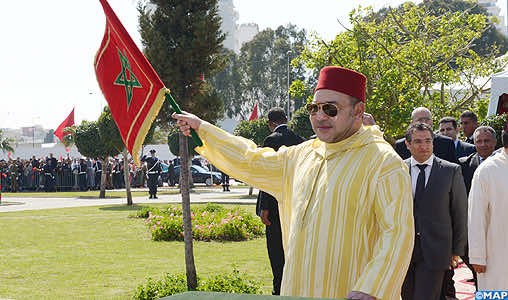 Tangier –  King Mohammed VI launched, Friday in Tangier, the construction works of important infrastructure projects that reflect his commitment to modernizing the city to be fit for a major international city.

The Moroccan monarch launched the construction works of a coastal road project (first phase), an underpass at the FAR Boulevard in Hay Bendibane- Beni Makada, an underground hopper at the Arab League square, as well as the project to build a beltway (first phase), develop the main avenues of the city, and to create the beltway of Mghogha industrial zone.

Costing some MAD 727 million, these projects are part of the Metropolitan Tangier program, launched by the Sovereign on September 26, and which seeks to achieve integrated, balanced and inclusive development in the Northern city and reinforce its tourism appeal.

The first phase of the coastal road project, which will link Cape Malabata to the ancient port of Tangier, provides  for the creation of an area for sports, recreational, cultural, and commercial activities with the aim to support the conversion program of the port of Tangier, and enhance the attractiveness of the city and its tourism appeal.

The first phase will be completed within 3 years and will mainly include the development of roads and green spaces, the strengthening of the public lighting network, and the construction of an underground parking with a capacity of 1,300 vehicles.

The underpass of FAR Avenue -Hay-Bendibane-Beni Makada and the underground hopper of the Arab League square will help decongest the city and improve road safety.

The bypass (road) connecting the Atlantic to the Mediterranean, dubbed the “beltway the two seas”, and whose first phase includes the construction of 10 km, will ease the traffic flow, improve the city’s economic competitiveness, and strengthen its road infrastructure.

As for the city’s avenues development project, it provides for of widening roads, the creation of bus lanes, coating sidewalks, the installation of street equipment, upgrading the public lighting network, and the creation of green spaces.

The project to create a beltway of the industrial zone of Mghogha, includes the construction of two bridges (one on the Mghogha river and the other on Al-Majd channel), and the establishment of a network for water collection and discharge. It aims to enhance the competitiveness of the industrial areas of Al-Majd and Mghogha, and improve the living conditions of the peripheral regions.