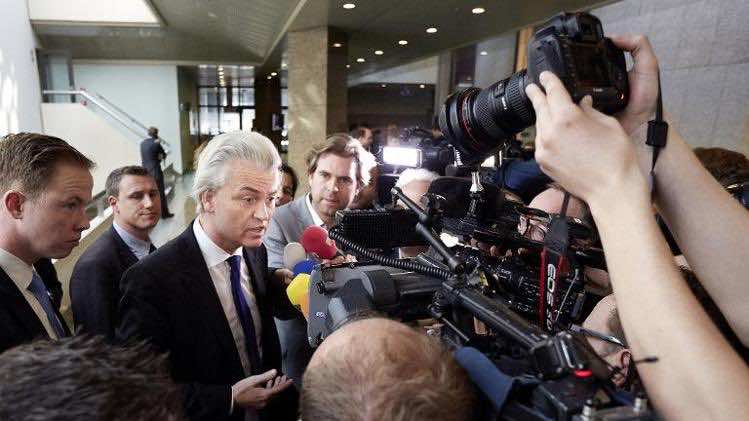 THE HAGUE- More members of Dutch populist Geert Wilders’ party abandoned the anti-Muslim leader on Saturday amid an unprecedented storm of protest after he vowed “fewer Moroccans‘ in the Netherlands.

Three councilors quit his Party for Freedom (PVV) party in the northern Friesland province, after similar moves by the head of the party’s bloc in the European parliament and two Dutch MPs.

National news agency ANP spoke of a PVV “exodus” after a jovial Wilders on Wednesday promised his chanting supporters he would arrange for there to be fewer Moroccans in the Netherlands.

The public prosecutor’s office has stopped counting the hundreds of complaints filed against Wilders and police stations have produced partly pre-filled complaint forms targeting Wilders to save them time.

A Facebook page “I’m filing a complaint against Wilders” had over 93,000 likes by Saturday evening.

“Why? Because we’re Dutch like you. We believe in our country and not in sowing hatred,” the Facebook page said. A similar page entitled “I’m not filing a complaint against Wilders because everyone is entitled to their own opinion” had meanwhile garnered 845 “Likes”.

The entire city council of Nijmegen said they would go to the police station to file a discrimination complaint against Wilders, whose PVV party had been the most popular in the Netherlands, according to opinion polls before the furor erupted.

Wilders, who said he would address journalists later on Saturday, cancelled a trip to Belgium to meet with the far-right Vlaams Belang party “for security reasons”.

The Flemish anti-immigrant party voiced support for Wilders, describing criticism of him as “a black day for freedom and democracy”.

Television pictures at a post-local election rally on Wednesday showed Wilders in The Hague asking party faithful whether they wanted “fewer or more Moroccans in your city and in the Netherlands?”.

“Fewer! Fewer!” the crowd shouted, with a smiling Wilders answering: “We’re going to organize that.”

A court in 2011 acquitted the platinum-haired politician on hate-speech charges, ruling that he had targeted a religion, which is permitted under Dutch freedom-of-speech laws, rather than a specific ethnic group.

Wilders, who is often reviled in Dutch immigrant communities for his fiery anti-Islam rhetoric, has in the past compared the Koran to Hitler’s “Mein Kampf” and has called Islam a fascist religion.

Dutch Jewish groups have also distanced themselves from the pro-Israel Wilders’ statements. Wilders told supporters on Wednesday he was allowed to ask the question because it fell under freedom of speech “and we have said nothing we’re not allowed to”.