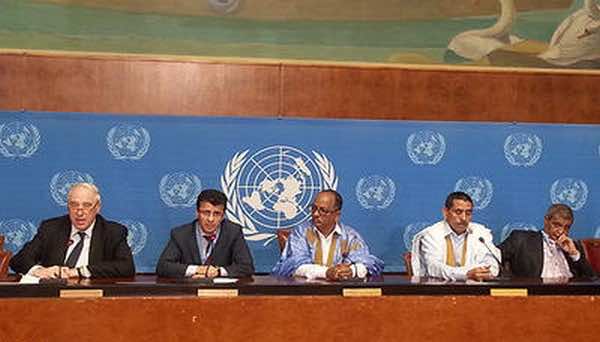 Geneva – The committee of families of the two Sahrawis killed, on January 5, by the Algerian army near the border with Mauritania, held a press conference on Friday at the UN headquarters in Geneva to draw attention to the serious breaches committed in the camps of Tindouf.

The families of two victims, Khatri Hammedha Khandoud and Mohamed Aliyenne Abbih, were represented at this conference by Abdellah Salma and Yabba Sellami as well as the lawyer Pierre Legros, former president of the Bar of Brussels and founding president of Lawyers Without Borders. “Faced with the silence of the Algerian authorities, we urge the international community, particularly the High Commissioner for Human Rights and the Human Rights Council to open an impartial investigation into the murder and sue its perpetrators and sponsors, they said. The lawyers also called for pressuring the Algerian authorities into lifting the siege imposed on Sahrawi populations in the Tindouf camps.

Abdellah Salma, uncle of Hammedha Khandoud, underlined the attachment of the victims’ families and their tribes to shedding light on this case, describing as unbearable the continued impunity for such appalling crimes.