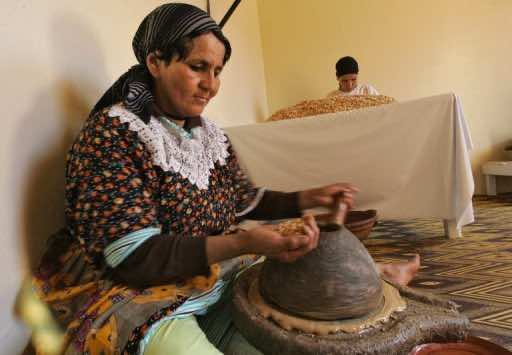 Sale – I decided to write about Moroccan women because of personal and psychological motives and needs. I grew up in the countryside, and never thought to question the suffering of women in my family in a patriarchal context. Because of the ongoing debate on feminism, I have started viewing the matter differently. My firsthand experience in the countryside is of great relevance and insight to me in this regard.

The achievements of Moroccan women:

Moroccan women are part of the universal movement in which the courage and struggle of some women herald the emancipation of others. Moroccan women are tirelessly determined to stand firm in the face of centuries of ignorance. The Moroccan woman, in all her so-called ‘vulnerability’, steps into a world that \had previously belonged to men. Moroccan women have chosen ‘men-only’ careers: pilots, journalists, researchers, writers, etc. given the need for financial independence or psychological growth.

Associations to assist women and their children have been founded, including Insaf (National Institute for the Distressed Women) and LDDF (Ligue des droits des femmes/League for the Rights of Women). Previously, women were easily victim to the sentence/threat “I repudiate you”. However, the question is, do these feminist achievements apply to women in the countryside as well?

The plight of women in the countryside:

According to the 2004 census, 89% of women in rural areas were illiterate. Still today, women are have access to insufficient education, if any. Article 13 of the Moroccan constitution stipulates, “all citizens  are granted the right to education and employment”. That feminist movements call for educated women to subvert and question male explanation/interpretation of the religious texts is striking. Illiterate women in the countryside however are secluded. Women in rural areas have little knowledge of the reform in family law. Women illiteracy, to my mind, is meant to consolidate the old conservative mentality in the countryside.

Most women in the countryside are poor, and their poverty has made them susceptible to abuse. Thus, they are forced to marry at an early age against their will and preference. Young girls at schooling age are sold/ traded as maids in the cities, and their patriarchal tutor exploits them by taking the money they earn. These maids are easy prey to rape (and therefore victims of honor killings), which later on makes them impregnated, unwed mothers who consequently abandon their babies.

Married women are perpetually prone to a variety of mistreatment. They are physically and verbally abused. They work all day: plowing and reaping in the fields, tending the sheep and goats, weaving, as well as taking care of children and the household. They are, however, craftswomen with great artistry, many being excellent weavers. Rural women, as a matter of fact, ensure the family’s material and spiritual unity. Recently, these women have created and founded cooperatives, for instance, Argan oil in the South.

All in all, women in the countryside are suffering in silence and live inconspicuous lives.

I shall address this issue in the light of the Moroccan movie ‘Ragged’ (The Sleeping Child) which recounts the story of Zineb and Khadija whose husbands immigrate to Spain. They leave the two wives facing the hardships of life alone. Zineb bears a child, and superstitiously puts him to sleep it waiting for his father to come back. Khadija’s husband disappears and leaves her with two children. In brief, the movie exemplifies the plight of women in the countryside I outlined above. To sum up the suffering that rural women endure, Abderrahman Youssoufi, (Prime Minister from 1998 to 2002) said, during his mandate, “The government looks at it on the basis that there is great deal lacking when it comes to women here [Morocco], especially in the countryside, in the areas of education, information and  health, as well a social and economic rights.”

Women gather in the cooperatives. They socialize and sympathize with one another talking about daily and family concerns. They have joined programs fighting illiteracy and have started becoming enlightened. However, I believe the influence their urban counterparts exert via associations have not yet reached these women. Could we argue that although feminist movements aim at uplifting all kinds of oppression and injustice while guaranteeing gender equity, feminists’ efforts have failed to reach rural women? Or, could we ‘condemn’ them of being class-oriented movements (upper-middle class women) and therefore elitist? Since many women in the countryside are Amazigh, could we speak for or start to theorize Amazigh feminism(s) especially given the fact that Amazigh people were at one point governed by queen ‘Kahina’?

Though some people still contend that Moroccan women are ambivalent in that they are the guardian of Moroccan cultural values at home and the proponent of modernity outside the house, they serve the nation with sensitivity and enthusiasm. Special care and equity are to be rightfully ‘bestowed’ upon women in the countryside so as to assure the country’s welfare. It goes without saying that  no nation can thrive  with an illiterate, stereotyped, oppressed, but important half of the active rural population. In the words of an unidentified poet, “woman is the future of the man.”