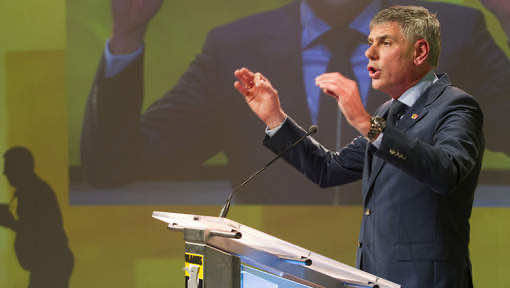 By
Aziz Allilou
-
Aziz Allilou is a student at the Higher Institute of Media and Communications (ISIC) and Morocco World News correspondent in Rabat.
Mar 24, 2014
Spread the love

According to the Belgian news website 7sur7, 2,000 activists appeared in support of the anti-Muslim Geert Wilders and chanted “fewer, fewer Moroccans!” as the Vlaams Belang party leader, Filip Dewinter, spoke about stopping immigration in Belgium, during the nationalist party’s electoral congress.

According to the same source, the Vlaams Belang party invited the Dutch politician as a special guest at the congress, but Wilder cancelled his trip to Belgium for safety reasons, as so many people are turning against him after his anti-Moroccan remarks.

The conservative nationalist party Vlaams Belang insisted on the same anti-Islam rhetoric used by Wilders. The Vlaam Belang leader, who was disappointed that Wilders cancelled his trip, expressed his sympathy, describing the Dutch right-wing leader’s case as a “defeat for democracy”, according to the same source.

“It’s serious that the individual is no longer able to express himself freely and that bullying wins over freedom of thought!” the Vlaam Belang leader explained. “It’s a dark day for democracy,” he concluded.