Cairo — A court ordered the execution of 529 supporters of deposed Islamist president Mohamed Morsi after only two hearings on Monday, in the largest such sentencing in Egypt's modern history. 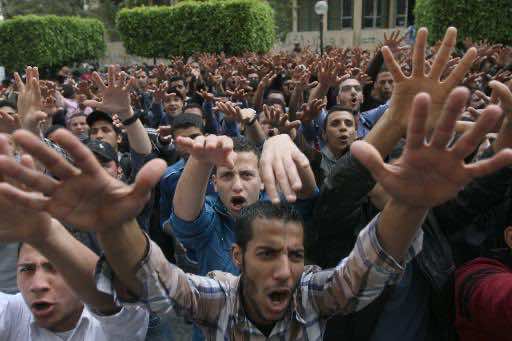 Cairo — A court ordered the execution of 529 supporters of deposed Islamist president Mohamed Morsi after only two hearings on Monday, in the largest such sentencing in Egypt’s modern history.

The unprecedented verdict, amid an extensive crackdown on Morsi supporters, is likely to be overturned on appeal, legal experts said.

The military-installed authorities have arrested thousands of Morsi supporters and put many of them on trial since the army deposed the Islamist on July 3.

The defendants in the southern province of Minya are part of a larger group of more than 1,200 alleged Islamists accused of killing policemen and rioting on August 14, after police killed hundreds of protesters while dispersing two Cairo protest camps.

Of the 529 defendants sentenced, 153 are currently in detention and the rest were tried in absentia. They automatically get a new trial if they turn themselves in.

Another 17 defendants were acquitted.

The verdict can be appealed at the Court of Cassation, which would probably order a new trial or reduce the sentences, legal expert Gamal Eid said.

“This sentencing is a catastrophe and a travesty and a scandal that will affect Egypt for many years,” said Eid, who heads the Arabic Network for Human Rights Information.

In Monday’s session, the court referred its decision to the mufti, the government’s official interpreter of Islamic law, for ratification. The mufti has upheld death sentences in the past.

Defence lawyer Mohamed Tousson said the judge rammed through the sentencing after he was angered by a lawyer who demanded his recusal in the first session.

“He didn’t even ascertain the presence of the detained defendants, he only got to the 51st defendant,” Tousson said.

“A lawyer then demanded his recusal. He got very angry, and adjourned the trial for sentencing.”

“It’s a huge violation of defendants’ rights. It will be overturned for sure,” he said of the death sentence.

A second group of about 700 defendants, including Mohamed Badie, the supreme guide of Morsi’s Muslim Brotherhood movement, are due in the dock on Tuesday.

Egypt has been rocked by continuous protests by Morsi supporters and by militant attacks that have killed more than 200 members of the security forces since his overthrow.

Rights group Amnesty International says at least 1,400 people have been killed in violence nationwide, and thousands more have been arrested.

Morsi is himself currently on trial in three different cases, including one for inciting the killing of protesters outside a presidential palace while he was in office.

The government crackdown has also targeted prominent activists of the 2011 revolt against former president Hosni Mubarak, as well as journalists.

On Sunday, a court released on bail leftwing activist Alaa Abdel Fattah, a leading symbol of the anti-Mubarak uprising.

He had been detained for joining an unsanctioned and violent protest in November.

The targeting of activists such as Abdel Fattah and journalists has prompted fears of a return to the authoritarian practices of the Mubarak era.

Also on Monday, another court is set to hold the third hearing in the trial of a group of journalists working with the Doha-based Al-Jazeera satellite television network.

The journalists, including Australian reporter Peter Greste, are charged with spreading false news and aiding the blacklisted Muslim Brotherhood.

Their trial comes against the backdrop of strained ties between Egypt and Qatar, which backed Morsi and the Brotherhood.

Journalists around the world have staged protests demanding the reporters’ release, with Washington and the United Nations also voicing their support.

Egypt’s interim president Adly Mansour has pledged to work towards a “speedy resolution of the case”.

Ibrahim Abdel Wahal, the lawyer of Egyptian-Canadian Mohamed Adel Fahmy who was arrested along with Greste, told reporters that at Monday’s hearing he will insist on his client being freed on bail to receive medical attention for a broken shoulder, suffered before his arrest.