Rabat-   The Moroccan football federation (FRFM) unanimously adopted on Sunday its updated statute to conform with the FIFA laws. 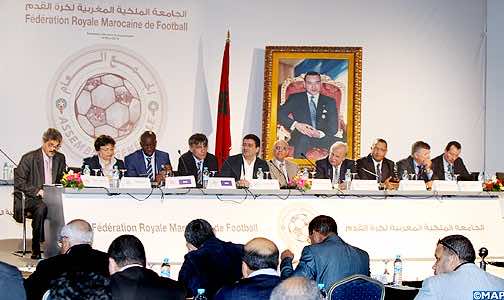 Rabat-   The Moroccan football federation (FRFM) unanimously adopted on Sunday its updated statute to conform with the FIFA laws.

The document was adopted during an extraordinary general assembly in the presence of managers of first league, second league, regional and amateur clubs.

The new text provides for a legal framework to support the development of football worldwide and secure to all components of Moroccan soccer representation at the general assemblies and steering committee.

The text also stipulates the establishment of bodies that contribute to guaranteeing transparency in the management of football affairs and the respect of democratic rules.

The meeting took place in the presence of representatives from FIFA, the African football confederation, the ministry of youth and sports and the Moroccan Olympic committee.

FIFA annulled last November the election of Fouzi Lekjaa as the new president of the Moroccan Football Federation (FRMF) and demanded a fresh vote.

The world governing body accused the FRMF of failing to adopt the correct statutes before organizing the election.