CAIRO - Egypt's Muslim Brotherhood leader went on trial Tuesday along with hundreds of other Islamists before the same judge who triggered a global outcry when he sentenced 529 convicted rioters to death. 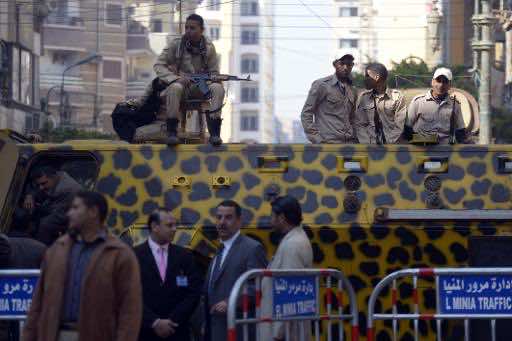 CAIRO – Egypt’s Muslim Brotherhood leader went on trial Tuesday along with hundreds of other Islamists before the same judge who triggered a global outcry when he sentenced 529 convicted rioters to death.

The trial of Mohamed Badie and around 700 supporters of deposed president Mohamed Morsi was adjourned after just a few hours until April 28, when judgment and sentencing is expected, a lawyer said.

Defence lawyers boycotted Tuesday’s session of the trial in the city of Minya south of Cairo, branding it “farcical” after Monday’s mass sentencing which the UN denounced as a breach of international human rights law.

Badie, who faces several other trials that could also result in the death penalty, was not brought to court Tuesday for security reasons, officials said.

The roughly 1,200 defendants in the case, including the 529 sentenced on Monday, are accused of the murder and attempted murder of several policemen during riots in Minya on August 14.

The rioting erupted as news spread that police had killed hundreds of Morsi’s supporters while dispersing two Cairo protest camps.

Lawyer Mohamed Tousson told AFP that the defence had walked out of Tuesday’s session of the Minya court.

“We boycotted the hearing because the trial is farcical,” he said. Tousson later said that the trial was adjourned to April 28 when the judge is expected to deliver his verdict on the nearly 700 Islamists.

Egyptian media reported that the judge, Said Yusef Sabry, has a history of delivering harsh judgements, including a 30-year prison sentence for a man who stole dresses from a women’s clothing store.

Legal experts said the unprecedented sentences on Monday are likely to be overturned on appeal, after the court rushed through the verdict in two hearings.

The sentencings sparked an international outcry and sent a chill through opponents of the military-installed regime, which has placed more than 2,000 alleged Islamists on mass trials since the army overthrew Morsi in July.

The court’s decision has been criticised by rights groups, the United Nations, the United States and the European Union, which questioned the fairness of proceedings against so many defendants lasting just two days.

he trial and verdict also sparked anger among Morsi supporters, with Islamist students clashing Tuesday with security forces near Minya University, pelting them with stones before police scattered them with tear gas, the official MENA news agency reported.

Egypt’s army-installed interim government has defended the court’s handling of the case, insisting that the sentences had been handed down only “after careful study” and were subject to appeal.

Of the 529 sentenced on Monday, only 153 are in custody. The rest were tried in their absence and will get a retrial if they turn themselves in.

The United Nations denounced Monday’s verdict. “The mass imposition of the death penalty after a trial that was rife with procedural irregularities is in breach of international human rights law,” said Rupert Colville, spokesman for the UN high commissioner for human rights.

Washington questioned how the court could have given the defendants a fair hearing in a trial that spanned just two days — an opening session on Saturday and Monday’s sentencing.

Defence counsel Tousson charged that the judge had rushed to sentencing on Monday after being angered by a lawyer’s request for his recusal at Saturday’s opening hearing.

“He got very angry, and adjourned the trial for sentencing,” Tousson said. “It’s a huge violation of defendants’ rights.”

The foreign ministry defended the judiciary, saying it was “entirely independent and not influenced in any way by the executive branch of government”.

At least 1,400 people have been killed in the crackdown on Morsi’s supporters and thousands more arrested, according to Amnesty International.

Morsi is himself currently on trial in three different cases. The army removed Egypt’s first freely elected president after a single year in power following mass protests demanding his resignation.