Tangiers - King Mohammed VI launched on Wednesday major projects geared to rehabilitating the historic and cultural legacy of the northern city of Tangiers and reconcile the city with its rich and outstanding cultural past. 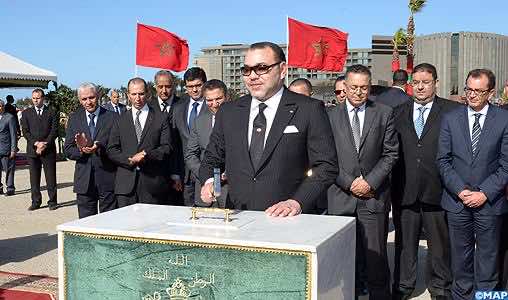 Tangiers – King Mohammed VI launched on Wednesday major projects geared to rehabilitating the historic and cultural legacy of the northern city of Tangiers and reconcile the city with its rich and outstanding cultural past.

The Sovereign launched construction works for an arts and cultures compound, rehabilitation of the Hercules Caves, development of the Perdicaris-R’Milat urban park, for a total investment of 130 million Dirhams.

The Projects, parts of the “Tangiers-Metropolis” program, reflect the interest granted by the King to preserving and developing the historic legacy of this city, rich by its plural identity, as well as the Sovereign’s constant concern to promote artistic creation in the region.

The arts and cultures compound, located in downtown Tangiers, is a space for the training and rehearsals of local drama companies and music bands.

It will include a theater of 1,500 seats, two rehearsal rooms, a drama school, clubs for Andalusian music, plastic arts and dancing, recording studios and a multi-usage room.

The project for the restoration of the Hercules Caves will consist in consolidating the caves walls, developing nearby spaces, building shops, cafeterias and restaurants and modernizing the lighting, with the aim of safeguarding this major natural attraction, classified as historical monument in 1950.

The Perdicaris – R’Milat urban park, a botanical and zoological park hosting indigenous and exotic species, will also undergo rehabilitation and renovation works that will include the restoration of Perdicaris castle, renovation of the R’Milat square and neighboring spaces and development of green spaces and pedestrian tracks for hikers.