CAIRO - Abdel Fattah al-Sisi is assured of winning Egypt's forthcoming presidential vote but at the cost of reviving the era of strongman rule as he faces a dilapidated economy and rising militancy. 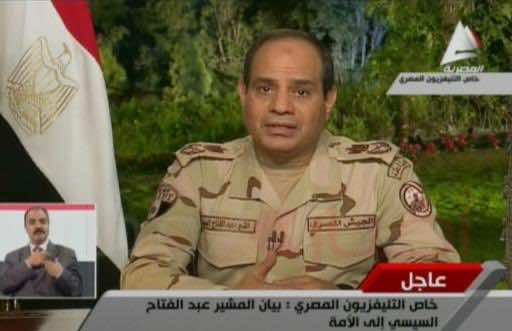 CAIRO – Abdel Fattah al-Sisi is assured of winning Egypt’s forthcoming presidential vote but at the cost of reviving the era of strongman rule as he faces a dilapidated economy and rising militancy.

Analysts say Field Marshal Sisi, who on Wednesday announced he was quitting the army to run for president, was certain to continue the crackdown on Islamists that started when he overthrew elected president Mohamed Morsi in July.

And, the experts say, with security issues likely to hamper Sisi from delivering on his promise of economic recovery, he could resort to repression more and more.

Sisi’s widely-anticipated candidacy is being hailed by the millions of Egyptians who are weary of more than three years of turmoil since the Arab Spring overthrow of veteran strongman Hosni Mubarak.

But it is likely to further inflame Islamist protests and worry those secular activists who fear a return to rule by military men and the strong-arm tactics of the Mubarak era.

Aside from Morsi, whose year in office deeply polarised the country, every Egyptian president has been drawn from, or installed by, the army.

Dressed in army fatigues for the last time in public, Sisi promised in a televised address to bolster the precarious economy and crush the “terrorism” that has surged since Morsi’s overthrow.

Michele Dunne, a senior associate at the Carnegie Endowment for Peace, said Sisi’s address suggested he would continue the crackdown on the Islamists that has made little headway in restoring stability.

“I didn’t hear Field Marshal Sisi say anything in the initial speech to suggest there will be a shift in the security strategy,” she said.

Since Morsi’s overthrow, his supporters have staged weekly and at times violent protests, leading to the deaths of at least 1,400 people, mostly Islamists, in clashes with police.

Militants in the same period have killed more than 200 security personnel in bombing and shooting attacks.

Encouraged by many Egyptians who view the Islamists as destructive, the authorities have arrested some 15,000 people and placed thousands on trial.

“If the crackdown goes on and people continue to be killed every week, it will be difficult, perhaps impossible, to restore stability and get the economy on its feet,” Dunne said.

The unrest has battered the economy, which is propped by billions of dollars in aid from friendly Gulf Arab states.

Regime human rights abuses and Islamist militant attacks on police are not new to Egypt, having marred Mubarak’s three-decade presidency before his overthrow in a popular uprising in 2011.

But since Morsi’s ouster they have surged to unprecedented levels, Dunne said.

“Egypt is now undergoing … the worst terrorism in decades” said Dunne. “Human rights are right now in a much worse state than they were under Mubarak.”

‘No return to Mubarak’

Sisi overthrew Morsi after millions took to the streets demanding the resignation of the Islamist president.

Sisi’s aides said the military chief’s intention was not to replace Morsi but that he had swayed by popular demand.

Despite assurances by Sisi’s camp that the “Mubarak’s era” would not be allowed to return, the cycle of violence and arrests is likely to continue, analysts say, as both the state and the Islamist opposition are equally opposed to serious compromise.

Prolonged unrest may hamper Sisi from delivering on his promise of economic recovery, but is unlikely to greatly erode his considerable support in the short term, said Shadi Hamid, an Egypt expert and fellow at the Brookings Institution.

“If he can’t deliver, which he probably won’t be able to, then he will have to rely on his arsenal of repression,” Hamid said.

Egypt saw a breakdown in security following Mubarak’s overthrow and under an interim military regime before Morsi’s election in June 2012.

Many now view the army as the only institution that can rein in the turmoil, further pushing back the prospect of a strong civilian president who can control the military.

“It once more confirms that the military republic since 1952 is back with the same mentality; the idea of the military as the institution that defends the state,” said Andrew Hammond, a Middle East analyst with the European Council on Foreign Relations.