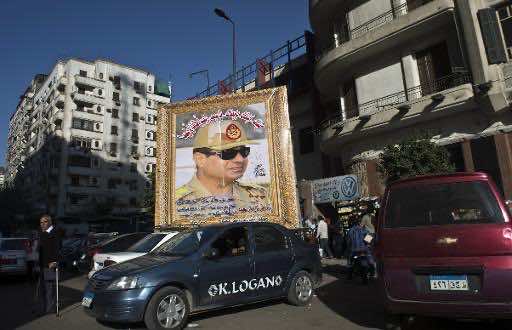 Sisi’s candidacy is being hailed by the millions of Egyptians weary of more than three years of turmoil since the overthrow of veteran strongman Hosni Mubarak.

But experts warn he is certain to continue the crackdown on Islamists that started when he overthrew elected president Mohamed Morsi in July.

Washington has long held an official position of non-interference in its Arab ally’s political process.

“The United States does not support individual parties or candidates in Egypt’s elections,” deputy State Department spokeswoman Marie Harf said in an email to AFP.

Harf said it was “critical that they are able to do so in an environment that allows the free expression of political views without intimidation or fear of retribution.”

Sisi earlier ditched his military fatigues and resigned as Egypt’s defense minister, a day after announcing he would stand for president.

Declaring his widely anticipated candidacy in a televised address on Wednesday, Sisi vowed to fight “terrorism” and work toward restoring Egypt’s battered economy.

The wildly popular candidate faces no serious competition in the election to be held before June and is widely seen as the only leader able to restore order.

And for the fourth time this week, the State Department condemned the “shocking verdicts” handed against 529 Morsi supporters, who were sentenced to death for August 2013 violence.

Secretary of State John Kerry has urged Cairo to drop the death sentences.

The United States routinely criticizes the Egyptian regime installed by the army after last year’s arrest and overthrow of Morsi, Egypt’s first democratically elected president following his 2012 win at the polls.

In response to the crackdown on pro-Morsi supporters, Washington has partially suspended its $1.5 billion yearly aid package to Cairo. Most of the aid — $1.3 billion — supports the military.

This week, the State Department warned it may freeze more of the aid.

The Obama administration never declared Morsi’s overthrow a coup, and even US Secretary of State John Kerry has contended that the army acted as it did to save democracy.

However, the United States has been critical of the new interim government for the slow transition to democracy and its poor record on human rights and freedoms.