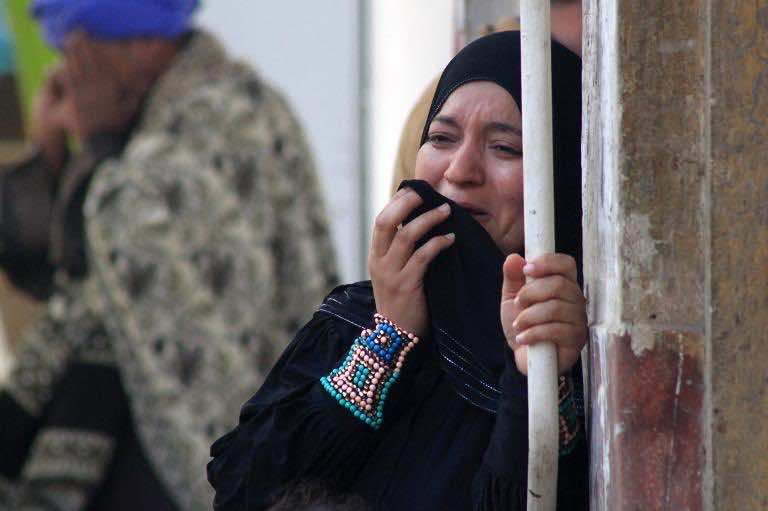 One youth thrown from the building in Alexandria was killed. The court submitted its verdict for approval to the mufti, the government’s official interpreter of Islamic law, the sources said.

The latest death sentences come despite international outrage at Egypt handing down the death penalty to 529 Islamists on Monday after just two hearings.

That verdict can be appealed, and the mufti has upheld death sentences in the  past.

The men sentenced to death on Saturday were among 63 people on trial over deadly violence in Alexandria’s Sidi Gaber neighbourhood on July 5 last year, two days after the amy overthrew Morsi.

The trial was adjourned until May 19 when the verdicts for the other defendants are expected to be announced.

The violence in Alexandria broke out as supporters and opponents of Morsi took to the streets of Egypt’s second city, the first to demand his reinstatement and the others to celebrate the end of his one-year rule.

Amateur video posted on social networks at the time showed men throwing two youths off the roof of the building.

It showed four young men cowering on the rooftop who are followed by several older men, one of them bearded and holding a jihadist flag.

The men are seen throwing stones at the youths and later one is thrown from the roof.

The video goes on to show club-wielding men beating the body of the youth.

Another man is later thrown from the roof but is only injured.

Egyptian authorities later said only one youth was killed in the attack and that one man had been arrested in connection with his death.

Egyptian authorities later said only one youth was killed in the attack and that one man had been arrested in connection with his death.

Washington urged Egypt not to go ahead with the executions, with deputy US State Department spokeswoman Marie Harf calling the sentencing “shocking”.

The verdict also drew fire from rights groups, the United Nations and the European Union, which questioned the fairness of proceedings against so many defendants lasting just two days.

Legal experts said the unprecedented sentences are likely to be overturned on appeal.

The military-installed regime has opened mass trials against more than 2,000 alleged Islamists since the army overthrew Morsi.

Two new mass trials of Islamists are being held in Minya province south of Cairo, where Monday’s mass death sentences were pronounced.

The detained head of Morsi’s Muslim Brotherhood, Mohamed Badie, is a defendant in both.

In the first, he stands accused with 714 others of murdering six people and the attempted murder of 51 others in the provincial town of Samalot, the official MENA news agency reported.

In the second trial, Badie is accused along with 203 others of assaulting policemen, disturbing public order, and damaging public and private property in another town in Minya province.

Only 160 of defendants in the first new trial are in custody, and in the second, just two of Badie’s co-defendants are in detention.

In all, some 15,000 suspects have been detained since the security forces dispersed two Cairo protest camps set up by Morsi supporters last August 14, killing hundreds of people.