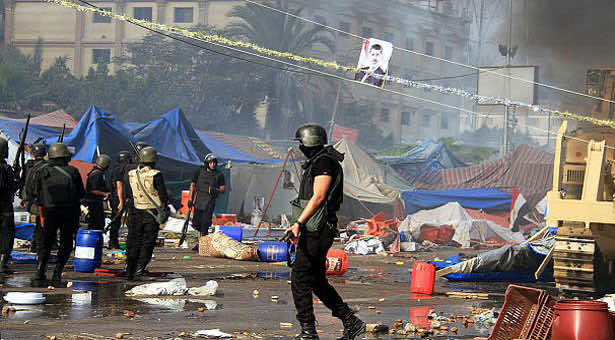 Attacks have surged since the army removed Morsi last July 3 and the military-installed authorities launched a deadly crackdown on his supporters.

A foreign ministry “factsheet” sent to media said 252 police and 187 military personnel were killed in “terrorist” attacks, along with 57 civilians.

Most of the attacks were in the northern Sinai Peninsula and targeted policemen and soldiers.

The army has poured troops into the mountainous and underdeveloped region bordering the Palestinian Gaza Strip and Israel, to combat growing militancy.

In mid-March, gunmen killed six soldiers at a checkpoint in Cairo.

Al-Qaeda-inspired group Ansar Beit al-Maqdis (Partisans of Jerusalem) has claimed most of the deadliest attacks, including a car bombing at a police headquarters in Cairo, shooting down a military helicopter and the suicide bombing of a tourist bus in the Sinai.

The Sinai-based group said the attacks were in retaliation for the crackdown on Morsi supporters.

More than 1,400 people have been killed in the crackdown, according to rights group Amnesty International. Thousands have been jailed.