CAIRO - Al-Jazeera's Australian reporter Peter Greste and fellow journalists from the satellite news channel were back in court in Egypt Monday after spending nearly 100 days in jail since their arrest. 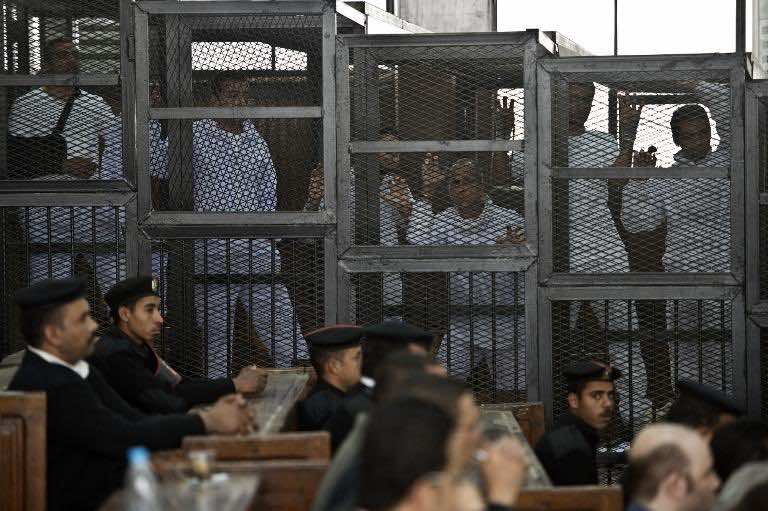 CAIRO – Al-Jazeera’s Australian reporter Peter Greste and fellow journalists from the satellite news channel were back in court in Egypt Monday after spending nearly 100 days in jail since their arrest.

Greste and his co-defendants are charged with spreading false news and supporting the blacklisted Muslim Brotherhood of deposed Islamist president Mohamed Morsi.

The Al-Jazeera trial, in which 20 defendants stand accused, has sparked an international outcry and fuelled fears of a media crackdown by the military-installed authorities.

Greste and seven co-defendants appeared in a caged dock on Monday wearing white prison uniforms, an AFP correspondent reported from the courtroom.

Eight defendants are in custody, and the rest are either on the run or abroad.

Greste and fellow journalist Canadian-Egyptian Mohamed Fadel Fahmy were arrested on December 29 in a Cairo hotel suite they used as a bureau after their offices were raided by police.

Fahmy is the Egypt bureau chief of Al-Jazeera English.

“After three hearings, it’s apparent that there’s no case against us. No witness has anything that incriminates us,” Fahmy told AFP, just minutes before the trial resumed.

Before the proceedings began, Greste’s brother Mike said his brother was “strong… but 100 days in prison must have left its effect on him”.

Prosecutors insist the journalists colluded with the Muslim Brotherhood, now designated a “terrorist” group, and falsely sought to portray Egypt in a state of “civil war”.

Defence lawyer Mokhles El-Salhy said his clients were doing their “job professionally and objectively” when they were arrested.

“They were covering violent clashes between protesters and security forces, as were all other channels. They didn’t make it up or fabricate it,” he told AFP before Monday’s hearing opened.

The trial comes against the backdrop of strained ties between Cairo and Doha since the army ousted Morsi last July.

Gas-rich Qatar was a close ally of Morsi’s government and the Brotherhood.

Egypt accuses Qatar of backing the Brotherhood, including through Al-Jazeera.

The authorities banned the Egyptian channel of the broadcaster’s network following Morsi’s removal.

Morsi himself has also been put on trial in several cases.

On Sunday, Ibrahim accused an Al-Jazeera editor of helping to leak classified documents in an espionage trial involving Morsi.

The interior minister charged that Amin El-Serafi, secretary to Morsi, leaked the documents to Ibrahim Mohamed Hilal, who he said was Al-Jazeera’s news editor and also a Brotherhood member.

Hilal allegedly facilitated a meeting between a Palestinian go-between, a Qatari official and an operative with an unspecified intelligence agency.