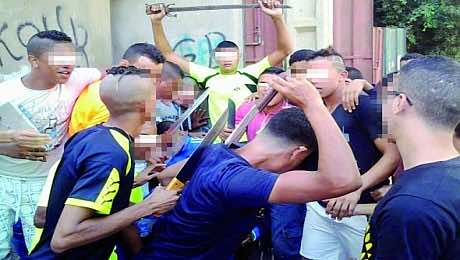 By
Aziz Allilou
-
Aziz Allilou is a student at the Higher Institute of Media and Communications (ISIC) and Morocco World News correspondent in Rabat.
Apr 1, 2014
Spread the love

Rabat- Last Friday, MWN reported that terrified citizens threatened to take to the streets against the insecurity in Casablanca; it seems that the citizens’ voice has been heard by the local authorities.

On Friday, the police in the city started pursuing suspects who created a Facebook page entitled Tchermil, in which they posted pictures of themselves armed with knives and swords, proudly displaying their loot.

Within two days, the local authorities arrested over 600 suspects, according to Assabah.

According to the same source, thanks to this two-day operation, local authorities could identify man who created the Tchermil page. He has a criminal record of petty offenses, and now he is the subject of a national investigation.

Reassuring the terrified citizens in the city, local authorities stated that the pictures on these so-called“Tchermil” pages  are staged, posted by teenagers to alarm the local population.

Yet, police statements don’t change the fact that the crime is increasing throughout the kingdom. According to Assabah, “to date, over 103,714 arrests have been made this year in Morocco.”

“Tshermil” comes from the Moroccan Arabic word “sharmal,” which means “to marinate” in reference to food. Tshermil in this context, though, refers to a criminal gang whose members specialize in extorting people’s belongings by threatening their victims using knives and swords. They are known for wearing expensive athletic clothes and having unusual haircuts.

The word Tshermil is a popular word in Moroccan prisons, commonly used by inmates to express anger at one another. When two people fight in a Moroccan prison, each of them tell the other “ana masharmal alik,” roughly translated, “I am mad at you.” The members of Tshermil are known for their hatred towards successful and rich people and for being ruthless with their victims.