BRISBANE, Australia, April 01, 2014 (AFP) - The father of Al-Jazeera journalist Peter Greste said Tuesday that the Australian's trial in Egypt over alleged links to the banned Muslim Brotherhood was "psychological torture" for his family. 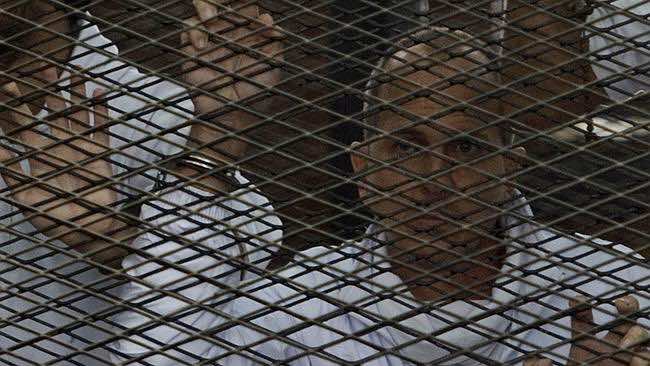 BRISBANE, Australia, April 01, 2014 (AFP) – The father of Al-Jazeera journalist Peter Greste said Tuesday that the Australian’s trial in Egypt over alleged links to the banned Muslim Brotherhood was “psychological torture” for his family.

Greste has denied charges of spreading false news and supporting the blacklisted Muslim Brotherhood movement of deposed Islamist president Mohamed Morsi but was refused bail on Monday after appearing in court in a caged dock.

His father Juris Greste said it was “infuriating and exasperating” that his son remained in maximum security detention even though authorities had failed to present any evidence against him in four court appearances spanning three months.

“I don’t want to start debates about what is torture, but really this process is a form of psychological torture to the extended family,” he told reporters in Brisbane, wearing a shirt emblazoned with the slogan “journalism is not terrorism”.

“Only we know what all of our family is going through, everybody’s suffering,” he said.

The trial of Greste and his fellow journalists, which has sparked an international outcry and fuelled fears of a media crackdown by the military-installed authorities, has been adjourned until April 10.

Australian Prime Minister Tony Abbott revealed over the weekend that he spoke to Egypt’s interim president Adly Mansour about the case last Thursday, telling him that Greste was just carrying out his duties as a journalist while working in Cairo.

“He wasn’t taking sides,” Abbott told reporters on Saturday. “He was simply doing his job and it is the job of a free media to report the facts as they find them and that is what he was doing.”